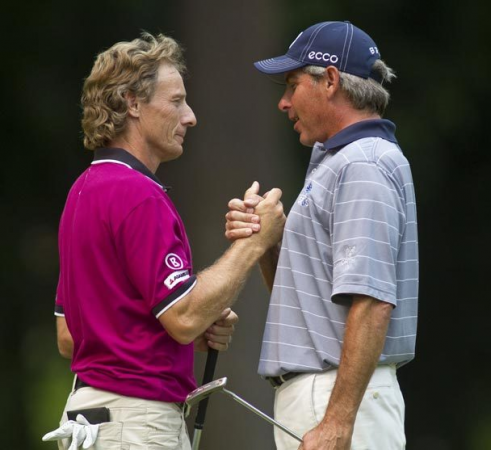 Bernhard Langer of Germany recorded a bogey-free 8-under-par 64 and was tied for the lead with Fred Couples after two rounds of the Mitsubishi Electric Championship at Hualalai Golf Club in Ka’upulehu-Kona,  Hawaii.

Langer, who claimed this title in 2009, birdied six of his first eight holes and added two more on the back nine in the first Champions Tour event of the year.

Couples also was bogey free in his second consecutive round of 65, and barely missing a 30-foot birdie putt on the final hole that would have given him sole possession of the lead heading to the final round.

“We heard a rumor the other day that (Langer) was having a problem with his thumb, and two days later he’s playing like he always does,” said Couples, who has won nine times on the senior circuit after claiming 15 victories on the PGA Tour.

Mark O’Meara eagled the fourth and seven holes en route to a 65 and was solo third, while David Frost of South Africa had a 64 to tie for fourth with Jeff Sluman, who carded a second straight 66, and Steve Elkington of Australia, who came in with a 67.

First-round leader Rocco Mediate followed his opening 63 with a 70 and was tied for seventh with Tom Lehman, who had a 66.