Kuchar-English Lead QBE by 5 After 61 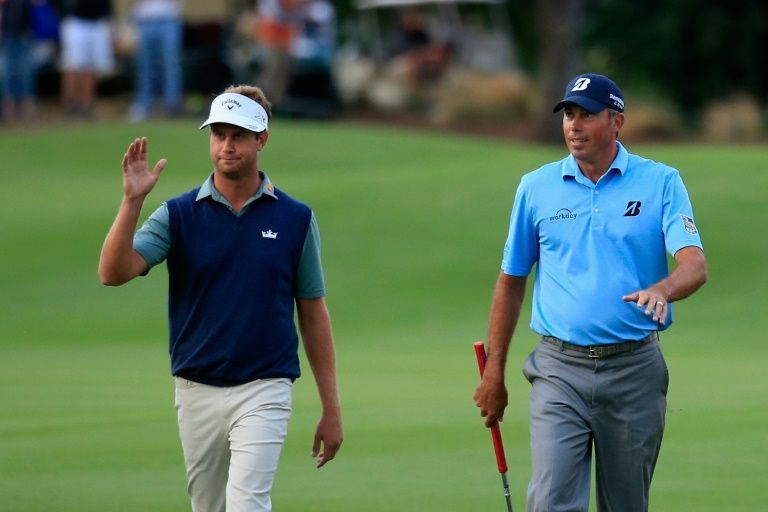 Matt Kuchar and Harris English have won the QBE Shootout twice before and they have designs on making it a hat trick.

Kuchar (pictured right) and English (left) posted a score of 11-under-par 61 in the modified alternate-shot format to build a five-stroke lead over Kevin Na and Sean O’Hair on the Gold Course at Tiburon Golf Club in Naples, Fla., in the 32nd edition of the tournament hosted by Greg Norman.

“In this format, it helps that you have two tee shots to get one in the fairway, but when you are the one hitting from the fairway, you don’t want to let your partner down and put him in a spot that’s tough to get up-and-down from,” said Kuchar, who teamed with English to win the QBE in 2013 and 2016.

“We’ve done well in this format before and you take your birdies where you can get them.”

Kuchar and English got them in two bunches in round two, starting the day with five in a row, and then making six straight through No. 17 before English missed a birdie putt on the final hole.

After opening with a 58 in the scramble format, they had the best round of the second day by five shots and are at 25-under 119 through 36 holes.

“We get along great, and our personalities and our games mesh out there,” English said. “I hit the ball a little farther off the tee and Matt is better with the irons and wedges, and we both made some putts.

“We got it going early and I don’t think we missed a fairway or green. It felt pretty easy out there today.”

First-round leaders Na, from Diamond Bar, and O’Hair birdied three holes in a flawless back nine for a 68, but must have felt they were run over by Kuchar and English.

Louis Oosthuizen of South Africa and Bubba Watson collected six birdies coming home in a 66 and are seven back in a tie for third with Mackenzie Hughes of Canada and Lanto Griffin, who made three birdies down the stretch in a 68.

Defending champions Rory Sabbatini and Kevin Tway made four birdies in five holes to start the back nine en route to a 68 and are one more behind in a tie for fifth with Cameron Champ of Sacramento and Tony Finau, who bounced back from a low start with seven straight birdies on the back nine in another 68.

Billy Horschel and Brendon Todd collected seven birdies against a single bogey in a 66, and are nine strokes back in a tie for seventh with Harold Varner III and Ryan Palmer, who needed four birdies on the back nine to salvage a 71.

Australians Marc Leishman and Cameron Smith eagled the sixth hole to highlight a 67 and are 10 shots behind in a tie for ninth with Daniel Berger and Steve Stricker, who cooled off after making three birdies on the first six holes, finishing at 69.

Sebastian Munoz of Colombia and Joaquin Niemann of Chile had four late birdies in a 69 and are 11 down in solo 11th, while Matthew Wolff of Agoura Hills and Abraham Ancer of Mexico are one more back in 12th and last place after yet another 69 despite making seven birdies.

The final round will be played in the 4-ball format.