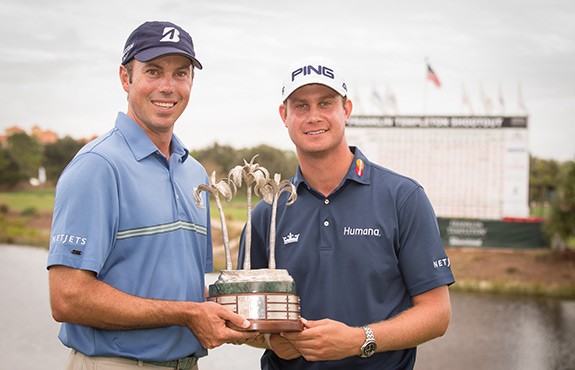 Matt Kuchar made a clutch two-putt par on the final hole after partner Harris English, who eagled the 17th, drove into trouble and they won the Franklin Templeton Shootout for the second time in three years on Saturday.

Kuchar and English finished with a better-ball score of 7-under-par 65 at Tiburon Golf Club in Naples, Fla., and recorded a 54-hole total of 28-under 188, one stroke better than Steve Stricker and Jerry Kelly, who won the tournament in 2009.

“It was quite a fun battle with Steve and Jerry, back and forth all day,” said Kuchar, who won the title with English in 2013 before they finished second each of the last two years.

“I got off to a good birdie-birdie start, but we knew it was going to be a battle when Jerry made eagle on the first hole. But this guy (English) made a great eagle on 17.”

Said English of his 10-foot eagle putt: “It was a little right to left, but I had a good line and hit it exactly the way I wanted. Luckily it went in.”

Kelly, 50, and Stricker, 49, also posted a 65 and weren’t out of it until Kelly’s 30-foot birdie putt on the last grazed the hole and rolled past.

Charley Hoffman and Billy Horschel closed with a 61 to finish two shots back in third, followed another two strokes behind by Kevin Chappell and Kevin Kisner, who shot 64.

Sean O’Hair and Kenny Perry also had a 64 and wound up seven shots behind in a tie for fifth with Smylie Kaufman and Justin Thomas, who totaled 66, and Rory Sabbatini of South Africa and Charles Howell III, who came in at 67.

Defending champions Jason Dufner and Brandt Snedeker finished eight strokes back in solo eighth after a 66.

Lexi Thompson, who joined Annika Sorenstam (2006) as the only women to play in the event, teamed with Bryson DeChambeau for 67 as they tied for 11th.