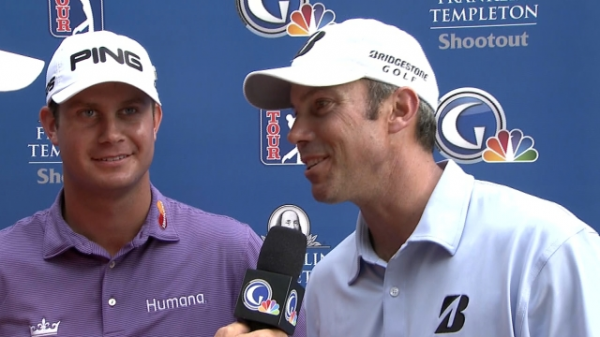 Harris English and Matt Kuchar continued their brilliant play in the Franklin Templeton Shootout, posting a bogey-free 6-under-par 66 in the modified alternate shot format to take a one-stroke lead over Jerry Kelly and Steve Stricker into the final round at Tiburon Golf Club in Naples, Fla.

English (pictured left) and Kuchar, who won the tournament in 2013 and finished second each of the last two years, have a 36-hole score of 21-under 123. In their last 11 rounds in this tournament they are 114-under.

“Alternate shot’s always a tricky format,” Kuchar said. “If you would have told us 6-under bogey-free in today’s conditions, we’d take that straightaway. I’d be surprised if another group was bogey-free today.

“It was good golf. I don’t remember a hole being nervous that we might walk away with a bogey. Every hole we kind of had a chance and it was a good, fun round of golf. … We would have the same game plan tomorrow whether we’re up four or up one.”

Said English: “I feel we played really well. You want to keep two balls in play. Kooch made some putts and tomorrow we want to do the same thing, get the ball rolling.”

The format for the final round on Saturday is better ball.

Stricker and Kelly, who won the tournament in 2009 and led after the first round this time, were four strokes down before rallying with birdies on the 14th, 16th and 17th holes to wind up at 68.

Rory Sabbatini of South Africa and Charles Howell III shot 69 and are five shots behind in a tie for third with Kevin Chappell and Kevin Kisner, who had a 68, while Charley Hoffman and Billy Horschel totaled 68 and are another stroke down in a tie for fifth with Smylie Kaufman and Justin Thomas, who came in at 66.

Jason Dufner and Brandt Snedeker are seven shots behind after a 70, while Sean O’Hair and Kenny Perry carded a 68 and are eight back in a tie for eighth with Luke Donald of England and Russell Knox of Scotland, who finished at 71.

Lexi Thompson, the second woman to play in the tournament joining Annika Sorenstam in 2006, combined with Bryson DeChambeau for a 71 and the are 10 shots behind in solo 10th.