Kokrak Wins by 2 Over Spieth at Colonial 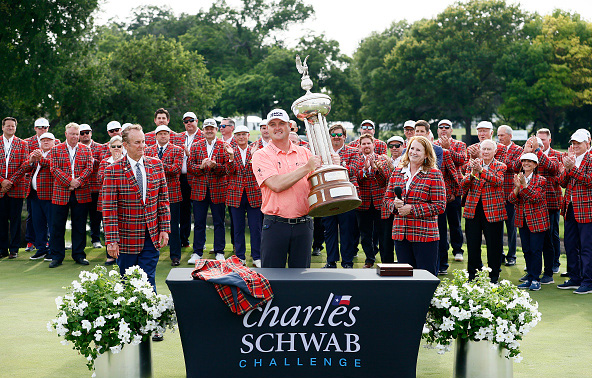 The 36-year-old Kokrak closed with an even-par 70 to take down local favorite Jordan Spieth by two strokes in the Charles Schwab Challenge at Colonial Golf Club in Fort Worth, Texas.

“They definitely were rooting for Jordan out there, and I understand that,” said Kokrak, who also won the CJ Cup at Shadow Creek last October after being winless since first playing on the PGA Tour in 2012. “He’s a Texas guy. I’m an Ohio guy. It’s fun. The crowds are crazy. But it’s fun to have a local kid and play well with him in the last group. The fans were definitely rooting for the guy next to me.

“Jordan and I had an ebb-and-flow out there and we both didn’t have our A-games today, but I rode it out. I didn’t finish the way I wanted to, but I still got it done and I’m happy to be standing here as the winner.”

Kokrak, who won twice on what is now the Korn Ferry Tour and has eight victories as a pro, made three birdies and three bogeys on the front nine, but went ahead with two birdies early on the back and survived two late bogeys to post a winning score of 14-under 266.

Spieth, who won at Colonial in 2016 and captured the Valero Texas Open last month, made three straight bogeys through No. 4, rallied with two birdies late on the front nine and was tied for the lead before making bogeys at Nos. 16 and 18 while struggling to a 73.

“I just had nothing today,” said Speith, who had been on top of the leaderboard since opening with a 63 before playing the middle rounds in 66-66. “It was amazing that I still had a chance near the end.”

Charley Hoffman of Poway collected six birdies against a lone bogey and carded a 65 that was low score of the day to finish four shots back in a tie for third with Patton Kizzire, who had three straight birdies on the back nine in a 67, and Sebastian Munoz of Colombia and Ian Poulter of England, who both totaled 68.

Troy Merritt matches Hoffman’s 65 with four birdies on the last five holes to wind up seven down in solo seventh, while Emiliano Grillo of Argentina and Lucas Glover both shot 68 to finish one more down in a tie for eighth with Adam Hadwin of Canada (70), Brian Harman (70), Kyle Stanley (70) and Brendon Todd (71).

Fifth-ranked Collin Morikawa of La Canada Flintridge and Cal holed out from 105 yards for an eagle on the first hole and tied for 14th after a 68, defending champion Daniel Berger birdied two of the last three holes to cap another 68 to tie for 20th, and second-ranked Justin Thomas tied for 40th after a 69.