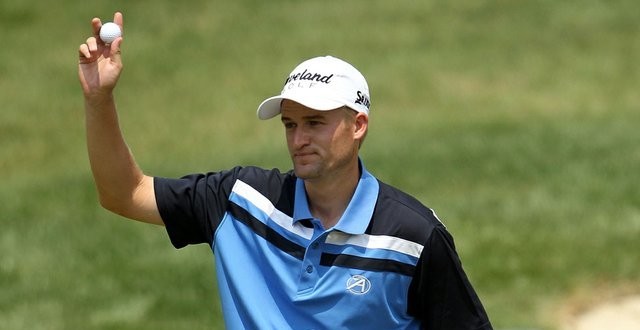 Even though he has established himself on the PGA Tour, Russell Knox of Scotland has yet to receive the recognition he deserves.

Jordan Spieth, Rory McIlroy, Jason Day and Bubba Watson will get most of the attention heading into the Travelers Championship this week at TPC River Highlands in Cromwell, Conn., even though Knox is the defending champion.

“It always feels nice (to be recognized), but at the same time, I blend in with everyone,” said Knox, who has two PGA Tour victories, including the 2015 WGC-HSBC Champions at Shenzhen Golf Club in Shanghai, China. “It’s nice to fly under the radar.

“I don’t know why people love professional golfers so much. We are just the same normal people as everyone else. I’ll never be a person who is super-recognizable. (But) sure I hope I win lots of times and more people recognize me.”

Knox sank a 12-foot putt to save par on the final hole of the Travelers last year to shoot 2-under-par 68, getting up-and-down from a greenside bunker to beat Jerry Kelly by one stroke.

That gave him his sixth victory as a pro and helped him finish fourth in the FedEx Cup point standings at the end of the regular season and 10th following the playoffs.

“That’s a putt I’ll remember forever,” said Knox, who played college golf at Jacksonville University and makes his home in Jacksonville Beach, Fla. “I felt like the Incredible Hulk when it went in. I could have ripped my shirt off.

“I finished second three times since I (last) won. And I mean, I really wanted to get another one.”

Still, Knox was somewhat overshadowed even in victory.

That’s because Jim Furyk stole the show by shooting a PGA Tour-record 58 to finish in a tie for fifth.

“Heck no, I dominated,” Knox said with tongue firmly planted in cheek when asked what it felt like to share the spotlight with Furyk. “But no, I mean I’m friends with Jim. We live close to each other (in Jacksonville). I was very jealous of him.

“I wanted to be the first person to break 60 two times. I shot 59 a few years back in (the Albertson Boise Open on Web.com tour). But, no, I’m very happy for him.”

Knox even has been overlooked a bit in his native Scotland, where many people believe he has deserved the Scotland Golfers of the Year Award each of the last two years in favor of players who stay and play at home, because he spends most of the year in the U.S. and rarely plays on the European Tour.

He’s the top-ranked Scot at 39th in the Official World Golf Ranking, down from a high of No. 18 last year.

And there was some outrage back home when captain Darren Clarke of Northern Ireland failed to pick him for the European Ryder Cup team last year.

“I was disappointed not to make the team,” Knox admitted. “(But) it’s in the past in my mind, to be honest. I try and play well for myself, my family, my sponsors and all of that.

For now, he’s concentrating on his title defense this week at TPC River Highlands, where he came from three strokes behind 54-hole leader Daniel Berger to win a year ago.

Knox made a strong showing when he defended his other PGA Tour title in the WGC-HSBC Champions last year in China, finishing in a tie for ninth a year after becoming the first Scot to capture one of the World Golf Championships.

Then he started this season with five straight finishes in the top 20, but struggled for a while before tying for 11th in the RBC Heritage and was 15th in the FedEx Cup standings last week before missing the cut in the U.S. Open.

“I can come here with a lot of confidence to say, ‘Let’s do it again,'” Knox told reporters on Travelers Championship media day. “My game is good. I’ve missed a few cuts. I got a couple of bad breaks in some of the tournaments that caused me to miss the cut. And I didn’t play great for a few weeks.

“I’m very optimistic. I had some equipment issues, but I have that sorted out. I truly expect to have a big (performance) here. … It will be an awesome feeling (to defend). I will be nervous, but it’s going to be an honor to be called defending champion.”

Although you can count on several others getting more attention.