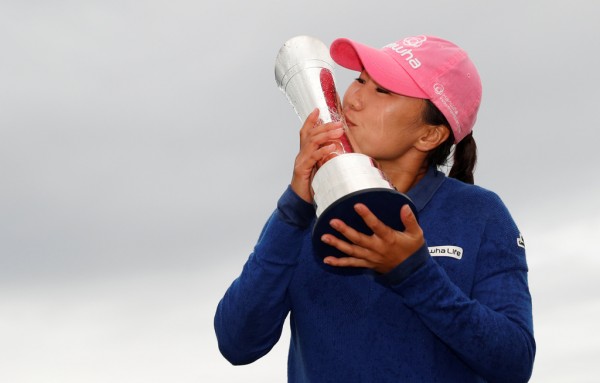 The 29-year-old Kim, who missed a one-foot putt on the 72nd hole that would have given her the 2012 Kraft Nabisco Championship, had a seven-stroke lead during a 1-under-par 71 and won the Ricoh British Women’s Open by two strokes over Jodi Ewart Shadoff of England at Kingsbarns Golf Links in Fife, Scotland.

“I think we judge ourselves a lot, everybody does,” said the 29-year-old Kim, who won for the third time this season on the PGA Tour and claimed her 10th professional victory. “But for our own self, I think sometimes you’ve got to have some self-compassion and we can make some mistakes. But I hope that mistake will make a more positive impact in life instead of dwelling on it, on the past. If you think about it, I think present moment is more special.

“I feel quite uplifted, I have to say because I really didn’t expect to win this week. And having (a six-stroke lead) going into the last round, was a great task. I think I managed it quite well.”

Kim, who opened with scores of 65-68-66, finished with a 72-hole total of 18-under 270, barely missing the tournament record of 19-under set by Karen Stupples of England at Sunningdale Golf Club in England in 2009.

Shadoff, seeking her first major title, fell short despite carding five straight birdies in the middle of a bogey-free 64 that was low round of the day while posting the best finish of her career in one of the Grand Slam events.

Michelle Wie of Stanford, who was the first-round leader at 64 before stumbling to a 76, closed with a 66 to finish five shots back in a tie for third with Caroline Masson of Germany, who had a 67, and Georgia Hall of England, who totaled 70.

Jenny Shin posted a score of 67 and was another stroke back in solo sixth, while Stacy Lewis wound up at 70 and was seven down in a tie for seventh with seventh-ranked Shanshan Feng of China and Anna Nordqvist of Sweden, who had 67s, and Hoo Joo Kim of South Korea, who came in at 68.

Second-ranked Lexi Thompson shot 69 and finished in a tie for 11th that included 10th-ranked Inbee Park of South Korea, a seven-time major champion who wound up at 72, while top-ranked So Yeon Ryu of South Korea tied for 43rd after a 73.