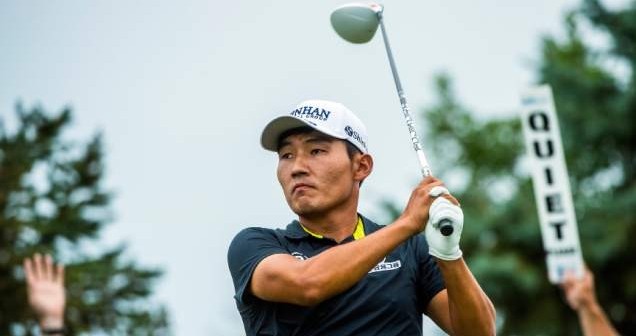 Sung Kang of South Korea, who has never won on the PGA Tour, is halfway there.

Kang carded a bogey-free, 9-under-par 63 to build a six-stroke lead over Russell Henley and Hudson Swafford midway through the 70th Shell Houston Open on the Tournament Course at the Golf Club of Houston in Humble, Texas.

The 29-yard Kang recorded a 36-hole total of 16-under 128, breaking by one stroke the tournament record set by Blaine McAllister in 1993 on the TPC Woodlands Course. It also is four shot better than the previous mark on the Tournament Course.

For him, it was all about his new putter and the greens.

“I had a great round,” said Kang, who has won three times in the Korean Tour. “I putted a little better than yesterday and I putted pretty good yesterday. Plus I teed off on the (front) and the greens were very pure.

“I just kept making the putts. It was a fun day. I want to play 10 more holes right now because I’m ready to go. The greens are just perfect here. I would have still putt like this with my old one. The ball was rolling pretty good (during a practice round) Tuesday, so I became more confident.”

Kang started at No. 10 and collected three birdies on the back nine, added four on the front and saved the best for a 30-foot eagle putt at No. 8. He holed four putts of more than 25 feet, but missed by one shot the tournament record of 62 set Fred Funk in 1962 on the TPC Woodlands Course.

Henley and Swafford both shot 67 for the second straight day, while first-round leader Rickie Fowler, who was four shots behind before going double bogey-bogey on the 15th and 16th holes, totaled 71 and was seven back in solo fourth.

Zac Blair birdied his last two holes while finishing on the front nine to cap a 67 and was eight strokes behind in a tie for fifth with Aaron Baddeley of Australia, who had a second straight bogey-free 68.

Daniel Berger recorded a 67 despite two bogeys coming home and was another shot down in a tie for seventh with 2013 PGA champion Jason Dufner, who posted a 69, 2009 Open champion Stewart Cink, who finished at 71, and Kyle Stanley, who also had a 71.