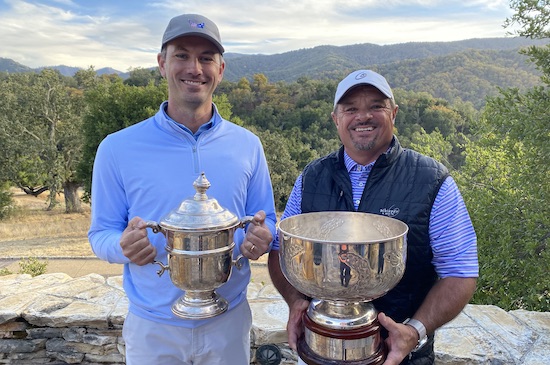 Michael Jensen of San Francisco made a par on the first playoff hole to turn back Jason Anthony of Fairfield and win the 29th Stocker Cup, a mid-amateur tournament, at The Preserve Golf Club in Carmel.

The tournament was not played last year because of the Coronavirus pandemic.

Jensen, who also captured the 2008 Alameda Commuters and lost in the semifinals of the 2020  San Francisco City Championship, posted a score of 66-71-72—209, 7-under par, while Anthony, who won the Northern California Valley Amateur the last two years among numerous other titles over the years, finished at 67-70-72—209.

“The last six feet, it just starts to get faster,” Jensen, who played college golf at Cal, said of his putt on the last hole of regulation. “I was just trying to roll it down there for a tap-in. … I know Jason well. We have played amateur golf together in tournaments like the Santa Clara County in the final group, and he’s a tough competitor.”

Anthony had a 25-foot birdie putt on the playoff hole and left it 10 feet short, then missed his par putt before Jensen made the winner from three feet.

Hoops was tied for the lead with Jensen and Anthony after 36 holes.