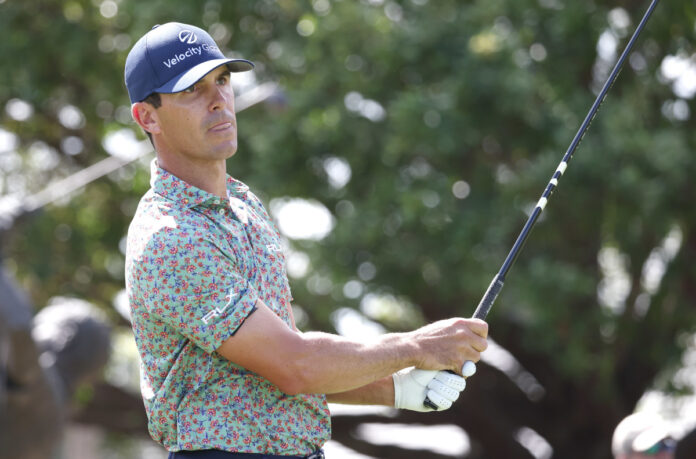 Billy Horschel got a free drop out of the deep rough and then dropped a bomb.

Horschel (pictured) sank a 29-foot birdie putt from the fringe on the final hole to cap a 1-under-par 71 and tie Talor Gooch for the lead heading to the last round of the 44th Arnold Palmer Invitational in breezy, difficult conditions at Bay Hill Resort and Lodge in Orlando, Fla.

“It was great to make that putt on 18 to shoot 1-under for the day is very satisfying and it was a nice way to finish,” said Horschel, who claimed the last of his six PGA Tour victories in the 2021 WGC-Dell Technologies Match Play. “You know, it was playing very tough out there today.

“I’ve seen these conditions on this course before, so that helped me a lot. You have to make your birdies when you can because you know you are going to make some bogeys. I did a really good job of staying patient.

“I grew up an hour from here, came to this tournament as a kid and it would be very special to win here.”

Horschel, whose best result in nine appearances at Bay Hill was a tie for 13th in 2017, added three other birdies and three bogeys in his round to equal Gooch, who had four birdies and four bogeys including one at the last hole in a 72, as they finished at 7-under 209.

“I probably sound like every other guy coming up here, but it was a grind out there,” said Gooch, who claimed his first PGA Tour victory in the RSM Classic last November. “The place was playing super, super difficult. The wind was whipping, and it was changing directions.

“When you have to be as precise as you have to be on this golf course, the little wind changes make a huge difference. So it was a grind. Like I’ve told a few people, if you’d have told me I wasn’t going to shoot over par and I didn’t have to play, I would have taken it and not touched a club today.”

Fourth-ranked Viktor Hovland of Norway, the second-round leader who was four shots ahead at one point in round three, holed a 39-foot bunker shot for an eagle on the sixth hole, but made four bogeys on the back nine to shoot 75, including 4-over 40 coming home, and is one back in solo third.

Fifth-ranked Rory McIlroy of Northern Ireland played the last four holes in 3-over for a 76 and is four shots behind in a tie for sixth with Chris Kirk, who sank a 7-foot eagle putt at No. 6 and a nine-foot birdie putt on the last hole for a 68, and Grahame McDowell of Northern Ireland, who had four birdies on a flawless back nine in a 69.

Corey Conners of Canada made three birdies on the back side in a 69 and is five strokes down in a tie for ninth with Matt Fitzpatrick of England, who holed a 10-foot birdie putt at the last hole for a 70, and Russell Henley, who had three birdies and three bogeys down the stretch for a 72.