Scheffler Hangs On to Defeat Hovland, Hatton, Horschel by One Stroke in the 44th Arnold Palmer Invitational 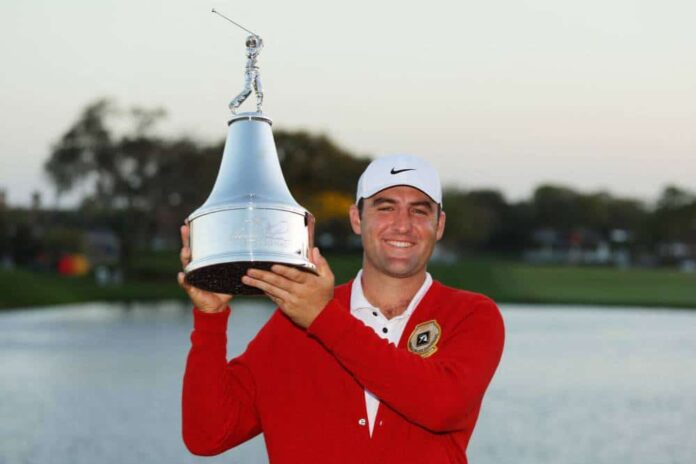 The 25-year-old Scheffler, who was one of five players to hold at least a share of the lead during the final round, made several clutch pars on a flawless back nine and shot even-par 72 to beat Viktor Hovland of Norway, Tyrrell Hatton of England and Billy Horschel by one stroke in the 44th Arnold Palmer Invitational in windy conditions at Bay Hill Club and Lodge in Orlando, Fla.

“It was emotional and it’s always great to win,” said the sixth-ranked Scheffler, whose two PGA Tour victories have come in his last three starts after he won the WM Phoenix Open last month. “I just trusted myself out there even though it was a tough day.

“I did not swing the club well at all today off the tee. I was hitting a lot of bad spots, but I just kept grinding. I made some key putts there toward the end and two great lag putts there to kind of finish off the round.

“It’s been a lot of hard work on my game at home and I’ve been playing really well lately. It’s nice to get a couple of wins. I just trusted myself as much as I ever had.

The sixth-ranked Scheffler, who has five top-10 finishes this season and took over the lead in the FedEx Cup point standings, made two birdies and three bogeys on the front nine, and while he made his only birdie on the back at No. 12, he hung on at the end with six straight pars to record a score of 5-under 283.

His best saves came on the last two holes, as Scheffler gave himself tap-in pars from 46 feet on No. 17 and another shortie for a winning par from 69 feet on the last hole.

The fourth-ranked Hovland, two led after round two, made three birdies on the back nine in a 74, but missed a 17-foot birdie putt from the fringe on the last hole that would have forced a playoff.

“I hit the ball beautifully at the start, just couldn’t make any putts to get the momentum going,” said Hovland, who has won three times around the world in recent months. “(Bay Hill is) just a patience test. You’ve got to ultimately make some putts and have things go your way to win out here.”

Hatton, who put himself in position with four birdies in five holes through No. 13, made two bogies after that and missed a 32-foot birdie putt on the final hole that would have put him in a playoff with Scheffler, finishing at 69.

Horschel, who shared the 54-hole lead, shot a ugly 40 on the front nine but rallied with two birdies in the back nine before closing with three straight pars, missing a 29-foot birdie putt that would have landed him in a playoff and wound up at 75.

Gary Woodland, who hasn’t won since the 2019 U.S. Open, took a one-stroke lead with a 24-foot eagle putt on the 16th hole, but finished double bogey-bogey for a 73 and was two shots back in a tie for fifth with Chris Kirk, who followed two birdies with two bogeys in the middle of the back nine and shot 72.

Lucas Herbert of Australia holed a 52-foot eagle putt at No. 16 en route to the low score of the day at 68 and was three-down in a tie for seventh with third-round co-leader Talor Gooch, who totaled 43 on the front nine and wound up totaled 77, while Sam Burns had a 71 and came in four strokes down in a tie for ninth with Matt Fitzpatrick of England, who closed with a 73.

Fifth-ranked Rory McIlroy of Northern Ireland, the first-round leader at 65, struggled to a second straight 76 to tie for 13th, while top-ranked Jon Rahm of Spain made three bogeys on the back nine in a 74 and finished in a tie for 17th.

Masters champion Hideki Matsuyama, who won twice early this season, collected six birdies in a 70 to tie for 20th and was replaced atop the FedEx Cup standings by Scheffler.