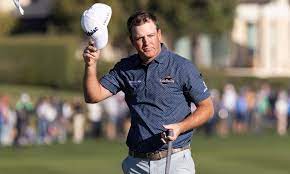 Tom Hoge was lifted to the top of the leaderboard by two eagles.

The 33-year-old Hoge carded a bogey-free, 8-under-par 63 to take a one-stroke lead over Si Woo Kim of South Korea and Maverick McNealy after the first round of the Shriners Children’s Open at TPC Summerlin in Las Vegas.

“I started a little slowly, but then I hit the pin with my second shot at No. 7, and the ball could have gone anywhere, but it went in the hole for an eagle,” said Hoge, who claimed his first PGA Tour victory and third as a pro last February in AT&T Pebble Beach Pro-Am. “Then I went 6-under for six holes.

“It’s always nice to hole a wedge shot like that, because it’s been a while since I’ve done it. Shoot, I’m trying to think of the last. I can’t even remember. But it’s only the first round and there’s a lot of golf to be played.”

Hoge, who also won the 2017 Bobcat North Dakota Open and the 2011 Canadian Tour Players Cup, made two birdies on each nine and also sank a 33-foot eagle putt on the 16th hole in his 63.

McNealy, from Stanford and Portola Valley, collected six birdies on the back nine in a bogey-free 64, which Kim, fresh from playing in the Presidents Cup, equaled with five birdies while finishing on the front nine after making three birdies and a single bogey at No. 12.

“I wanted to be the first guy out at least on one of the nines and take the first divot, so I was here at 6:30 ready to tee off,” said McNealy, who moved to Las Vegas in 2017. “Sam Ryder, he and I were talking on the first hole about the first time we played together here five years ago. It felt like yesterday, but it also feels like forever ago. That was the week that I packed up everything I owned in my mom’s old Ford Explorer and drove to Las Vegas and moved here.

“I’ve been a proud resident for five years, a hockey fan and lucky to get to play a golf course like this, TPC Summerlin. Right next door, TPC Las Vegas, The Summit, Shadow Creek. There’s a lot of great golf courses out here.”

Defending champion Sungjae Im of South Korea birdied the last three holes for a 65 and is in a big tie for fourth with 20-year-old rising star Tom Kim of South Korea, who had three birdies on each nine in a bogey-free round; Ryder, who also played bogey-free alongside McNealy; Keith Mitchell, who sank a 102-yard approach shot for an eagle on the last hole; Will Gordon, who made four birdies in a row on the back nine; Thomas Detry of Belgium, who birdied three of the last four holes, and Tyler Duncan, who had seven birdies against a single bogey in yet another 65.

Fourth-ranked Patrick Cantlay of Los Alamitos and UCLA, who won this tournament in 2017 for the first of his eight PGA Tour victories and has finished second twice at TPC Summerlin, made two birdies on each nine in a bogey-free 67 and is in a tie for 21st that includes Max Homa of UCLA and Cal, who opened the new season by winning the Fortinet Championship at Silverado in Napa and went 4-0-0 in the Presidents Cup.