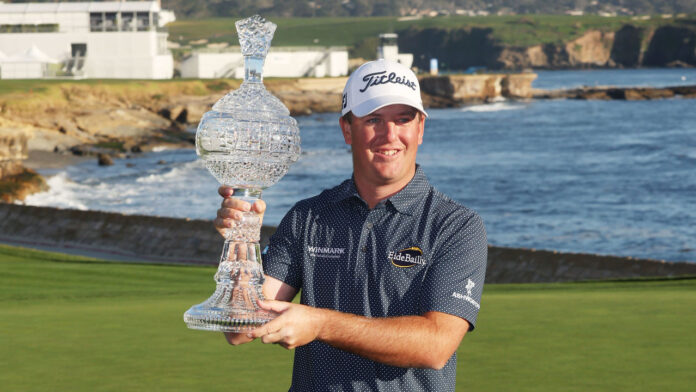 The 32-year-old Hoge birdied three of the last five holes and closed with a 4-under-par 68 to beat Jordan Spieth by two strokes in the 81st version of the AT&T Pebble Beach Pro-Am, the old Bing Crosby Clambake.

The first three rounds were played at Pebble Beach, Spyglass Hill Golf Course and the Shore Course at Monterey Peninsula Country Club, and after the 54-hole cut was made, the final round was played solely at Pebble Beach.

Hoge moved to second in the season-long FedEx Cup standings behind Hideki Matsuyama of Japan, who has won twice this season.

“This really looks good, it’s pretty cool,” Hoge said of the tournament trophy, which he picked up during his winner’s interview with Amanda Balionis of CBS Sports. “It’s been a long time coming for me.

“I’ve been a little nervous in the past when I’ve been in the running in the final round on Sunday and I got off to a slow start today with a bogey and double bogey on the front nine, but then I relaxed and made some good putts on the back nine.

“I’m almost a little in shock. It’s been so long since I won anything that I forgot how to celebrate. It’s awesome. I’ve worked through so many hard times.”

Hoge, whose only previous pro victory came in the 2011 Canadian Tour Players Cup, was tied for the lead after 54 holes, but passed Spieth by making a four-foot birdie putt at No. 14, a birdie from nine inches after a brilliant shot from 142 yards at No. 16 and a 22-foot putt for birdie at No. 17 to finish at 19-under 268.

Spieth seemed close to his 13th PGA Tour victory when he held a two-stroke lead on the back nine, but he barely missed several birdie putts in his 69 and pulled a critical five-footer for par on the 17th hole.

“It’s disappointing not to win after having a two-stroke lead on the back nine in the final round,” said Spieth, who won at Pebble Beach in 2017 and was 11 shots behind after two rounds this time. “I hit a lot of good shots and played well, and barely missed several putts, but that was a bad putt at No. 17 and I just hit it too hard.

“I didn’t know that I had a two-stroke lead on the back nine because I don’t look at the leaderboard too much, but I did look at one point and saw my name at the top, I but didn’t look to see by how much.

Beau Hossler of Rancho Santa Margarita, also tied for the 54-hole lead, had a chance to tie Hoge with an eagle on the final hole, but made a bogey-6 instead and shot 71 to finish three shots back in solo third, while fourth-ranked Patrick Cantlay of Los Alamitos and UCLA had a 71 to wind up one more down in a tie for fourth with Troy Merritt, who birdied the first four holes but made a double-bogey 5 at No. 17 in a 67.

Andrew Putnam of Pepperdine, who also was tied for the 54-hole lead, struggled to a 73 and wound up five strokes back in a tie for sixth with Matt Fitzpatrick of England, who had a bogey-free 68, and Joel Dahmen, who was in the hunt before making three bogeys on the back nine in a 72.

Pat Perez of San Diego made two birdies down the stretch to card a 68 and was six shots behind in a tie for ninth with Jonathan Byrd, who made three birdies on each nine in a 67, and Seamus Power of Ireland, who had a five-stroke lead after 36 holes and closed with a 72 thanks to two late birdies.

Pro Taylor Moore and amateur Kyle Adams, President of RKA Investments LLC, teamed up to win the pro-am portion of the tournament by one stroke over Doc Redman and actor Michael Pena with a score of 33-under 254. Mackenzie Hughes and former NFL quarterback Alex Smith finished three shots back in third.