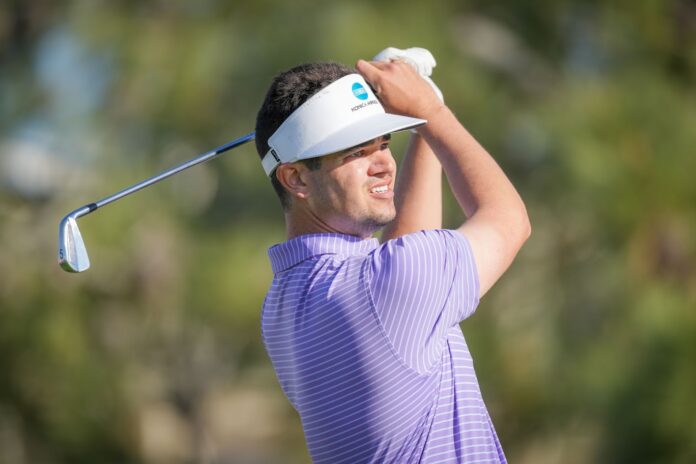 Beau Hossler has never won as a professional, but you wouldn’t have known it from his third round in the AT&T Pebble Beach Pro-Am.

The 26-year-old Hossler (pictured), from Rancho Santa Margarita, carded a bogey-free 65 at Pebble Beach Golf Links and is tied for the lead with Andrew Putnam of Pepperdine and Tom Hoge heading to the final round of the AT&T Pebble Beach Pro Am.

Each player in the field played Pebble Beach, Spyglass Hill Golf Course and the Shore Course at Monterey Peninsula in the first three rounds, but after the 54-hole cut was made, the final round will be played completely at Pebble Beach

“Pebble can give and take so quickly, right? I was glad to be on the receiving end today,” said Hossler, who lost in a playoff to Ian Poulter of England in the 2018 Houston Open. “I hit it well, played really conservatively, frankly, even though it might not look like it, and was fortunate to not have any misses really get me in significant trouble.

“It was as fairly stress free as you can be around here. I hit a lot of greens and when I did miss the greens, it was in a pretty decent spot. I rolled the putter beautifully.”

Hossler, who claimed 14 amateur titles including the Southern California Amateur twice, holed out for an eagle from 47 feet on the sixth hole and birdied four of the last six holes to record a 54-hole score of 15-under 200.

Putnam birdied five straight holes through No. 17 at Pebble Beach in a 4-under 68, while Hoge made two birdies on each nine in a 4-under 68 at Spyglass Hill, considered the most difficult course in the rotation.

“It was pretty ugly, that first nine,” said Putnam, whose only PGA Tour victory came in the 2018 Barracuda Championship. “It was a really bad start, a three-putt, kind of a stupid mistake and then kind of got a bad break, ball got kind of buried up in a lip.

“So, it can happen out here. And kind of kept it in play and started hitting some good shots, and the putter started working pretty good on that front side.”

Said Hoge, whose only pro victory came in the 2011 Canadian Tour Players Cup: “I don’t know what it is, but I always seem to shoot better scores at Spyglass than I have at some of the others. I don’t know, I mean, it certainly is an advantage just from the way the scoring averages are and all the golf courses, but I seem to play Spyglass a little bit better, so it was a good one for me today.”

Fourth-ranked Patrick Cantlay of Los Alamitos and UCLA birdied the last two holes for a 4-under 68 at Pebble Beach and is one stroke behind in a tie for fourth with Jordan Spieth, the 2016 Pebble Beach champion, who eagled the sixth hole and added eight birdies in a 9-under 63 at Pebble, and Joel Dahmen, who had a bogey-free, 6-under 66 at Spyglass Hill.

Seamus Power of Ireland, who held a five-stroke lead after two rounds, struggled to a 3-over 74 at Monterey Peninsula and is two down in solo seventh, while Jason Day of Australia had a 2-under-par 70 at Spyglass and is fourth strokes behind in a tie for eighth with Denny McCarthy, who birdied four holes on the back nine for a 5-under 66 at Monterey Peninsula.