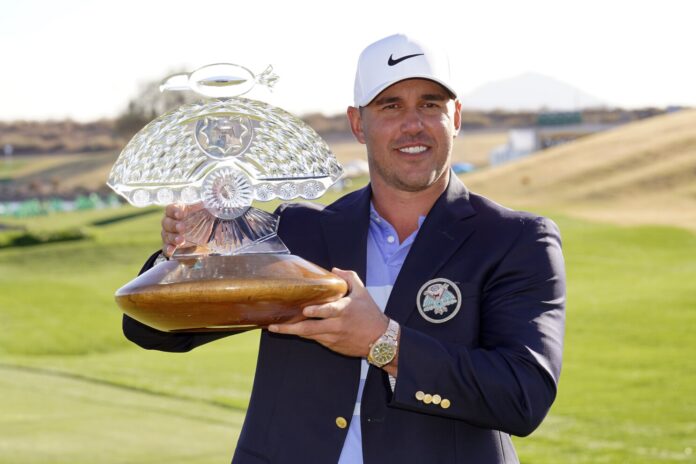 The PGA Tour’s West Coast Swing makes a stop in Arizona this week for the 87th version of the WM Phoenix Open at TPC Scottsdale.

Brooks Koepka is defending champion, winning for the second time in what has become known as “The Greatest Show on Grass” because of the stadium-like setting at the par-3, 167-yard 16th hole, where some 20,000 fans surround the players.

“I just keep it the same (at No. 16). I’m pretty chill. It doesn’t bother me whether they’re hooting and hollering on 16. I love 16. It’s one time a year. I enjoy it. It gets me fired up. It gets me going. I’m looking forward to it. You need to hit a good shot on that hole. It’s a little extra focus, you get a little more tuned in, I guess.

“I had a couple of close calls (last season) before then. I don’t know why I never got it done. I just had to kind of look back and kind of reflect on it. But I think the failures allow me to win. You look back on the things you did, what you did wrong, where you need to work on things.

“That’s kind of what we took coming into the year.”

Other former Phoenix Open champions in the field are Webb Simpson, Rickie Fowler and Gary Woodland, and other big names playing are Jordan Spieth, Matt Fitzpatrick of England, Bubba Watson, Adam Scott of Australia and Louis Oosthuizen of South Africa.

However, the big star of this event is the 16th hole, and in addition, this tournament leads right into the Super Bowl on Sunday.

1. Patrick Cantlay, United States – The fourth-ranked Cantlay, who captured the FedEx Cup and was PGA Tour Player of the Year last season, tied for fourth in the AT&T Pebble Beach Pro-Am, finished solo fourth in the Sentry TOC and was ninth in the America Express to start the new season. Surprisingly, he is making his debut this week in the WM Phoenix Open.

2. Jon Rahm, Spain – The top-ranked player in the world has gotten off to a strong start this season with a solo second in the Sentry TOC, a tie for third in the Farmers Insurance Open and a tie for 14th in The American Express. He is making his seventh start in Phoenix and his never finished outside the top 16, with his best a tie for fifth in 2015 and a tie for ninth two years ago.

3. Viktor Hovland, Norway – Coming off a victory in the Dubai Desert Classic two weeks ago after winning the Mayakoba Classic in November and the Hero World Challenge in December to give him six pro wins at the age of 24, Hovland is up to No. 3 in the World Golf Rankings. He made his debut in the WM Phoenix Open two years ago, shot 70-72—142 to miss the cut by one.

4. Justin Thomas, United States – The seventh-ranked Thomas was third at Mayakoba, tied for fifth in the Sentry TOC, tied for 18th in the CJ Cup and tied 20th in the Farmers early this season. He is making his eighth start in the WM Phoenix Open and finished third in 2019 after leading with a 64 in the first round, and tied for third in 2020 before tying for 13th last year.

5. Hideki Matsuyama, Japan – The only two-time winner on the PGA Tour this season with victories at the Zozo Championship and the Sony Open in Hawaii, Matsuyama has climbed to 10th in the World Golf Rankings. He claimed two of his eight PGA Tour victories in the WM Phoenix Open in 2016 and 2017, tied for second in 2015 after tying for fourth a year before.

6. Jordan Spieth, United States – Seemed to be on the way to his 13th PGA Tour victory before Tom Hoge passed him at the finish last week at Pebble Beach and Spieth was second after tying for 18th in CJ Cup and tying for 21st in the Sentry TOC this season. Makes his sixth start in Phoenix, he tied for fourth last year after tying for seventh in 2015 and tying for ninth in 2017.

7. Xander Schauffele, United States – The eighth-ranked Schauffele tied for 18th in the Saudi International on the Asian Tour last week after finishing solo 12th in the Sentry TOC and tying for 18th in the CJ Cup earlier this season. He held the lead after the second and third rounds last year at Phoenix before a closing with 71 and tied for second, one behind winner Brooks Koepka.

8. Matt Fitzpatrick, England – A seven-time winner as a pro, the 25th-ranked Fitzpatrick has turned his attention to the PGA Tour and tied for sixth in the AT&T Pebble Beach Pro-Am last week after tying for 30th early this season in the Bermuda Championship, and posting five top-10 finishes in the U.S. tour last season. He is making his debut in the WM Phoenix Open.

9. Brooks Koepka, United States – The former world No. 1, who is down to No. 20 in the rankings, has claimed two of his eight PGA Tour victories, including four majors, in the WM Phoenix Open last year and in 2015. However, Koepka’s best finish in six starts this season was a tie for 28th in the Sentry Tournament of Champions and he has missed the cut three times.

10. Bubba Watson, United States – Bubba eagled the last hole in the Saudi Invitational last week before Harold Varner upstaged him with a 92-foot eagle putt to beat him. Watson also tied for fourth in the Zozo, tied for sixth in the Rocket Mortgage and tied for seventh in the CJ Cup this season. Has six top-10 finishes in Phoenix, including ties for second in 2014 and 2015.

1. Mito Pereira, Chile – A seven-time winner on lower pro tours, Pereira has finished solo third in the Fortinet Championship and wound up T-25 in the Farmers Insurance Open this season.

2. Doug Ghim, United States – Posted nine top-25s last year in second season on the PGA Tour and this year finished T-27th in Mayakoba Classic and T-34 in Farmers after opening with 66.

3. Henrik Norlander, Sweden – Two-time winner on the Korn Ferry Tour posted a T-4 at Sanderson Farms and T-18 at the Zozo Championship. Wound up T-22 in Phoenix last year.