Henley Closes With 70, Coasts to Four-Shot Victory Over Harman at Mayakoba 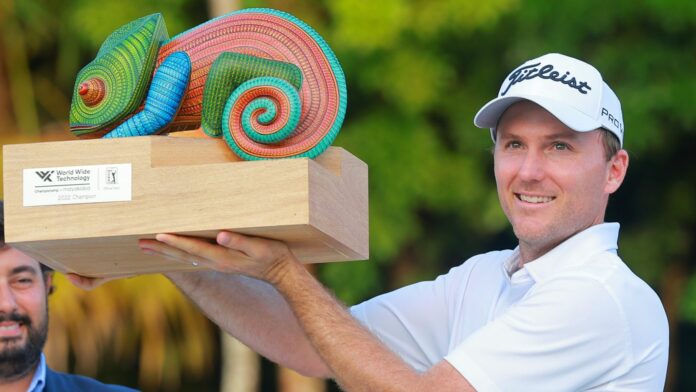 Russell Henley lamented being unable to hold final-round leads in the past, but it didn’t happen this time.

Of course, the 33-year-old Henley held a six-stroke lead after 54 holes and closed with a 1-under-par 70 to win by four shots over Brian Harmon in the World Wide Technology Championship at Mayakoba on El Camaleón Golf Course in Riviera Maya, Mexico.

“I just tried to learn from those times when I couldn’t hold the lead, my screwups,  and do the things that work for me,” said Henley, who failed to hold a final-round lead and win in his last five attempts. “It’s hard to win out there and, honestly, all of those times I didn’t get it done certainly hurt. You never know if you’ll win another.

“I was really nervous this weekend because I slept on the lead each of the last two nights and with a six-shot lead last night, and that’s a little intimidating. We want to see what we’re made of out here and get tested under pressure. I went out there with confidence today and just got the job done.

“It was great and coming down the last hole with a four-stroke lead was really cool. I’m excited and a little emotional.”

Henley, who claimed his fourth PGA Tour victory and first since the 2017 Shell Houston Open, made his first bogey of the week at No. 5 but virtually put the victory away with birdies on the next three holes before adding a bogey at No. 16 and finishing with a record-tying score of 23-under 261. He started with scores of 63-63-65.

Harman, who like Henley played college golf at Georgia, played bogey-free in recording his third 66 of the week but never challenged his friend.

“Russell just played so well, he’s a great friend and I feel so happy for him,” said Harman, who has won twice on the PGA Tour. “I’m really jealous of his putting. That part of his game is so good and his ball-striking has been coming around.

“But when that putter heats up, he’s tough to beat.”

Second-ranked Scottie Scheffler, who could have regained the top spot in the world from Rory McIlroy by winning or finishing solo second this week, gave it a shot with a bogey-free 62 that included an eagle on the third hole.

Scheffler finished five shots back in a tie for third with Joel Dahmen, who collected seven birdies after opening a 65 with his lone bogey; Troy Merritt, who eagled the fifth hole in a 67; Seamus Power of Ireland, who won in Bermuda last week and closed with a bogey-free 68, and Will Gordon, who led after an opening 62 and finished with a 69.

David Lingmerth of Sweden had four birdies on each nine while shooting 65 and was one more behind in a tie for eighth with Sam Ryder, who rattled off seven birdies after an opening bogey in another 65.

Two-time defending champion Viktor Hovland of Norway totaled 68 and finished seven strokes back in a tie for 10th with Maverick McNealy of Portola Valley and Stanford, who had seven birdies in a 66; David Lipsky of Los Angeles, who made three straight birdies early in another 66; Taylor Montgomery, who carded a bogey-free 66, and Patton Kizzire, the 2018 champion at Mayakoba, who birdied the last hole to salvage a 71.

Ninth-ranked Collin Morikawa of La Canada Flintridge and Cal made three straight birdies through No. 7 in a bogey-free 67 to tie for 15th.

Robert Streb made the fourth hole in one of the tournament on the eighth hole and tied for 42nd following a 69.