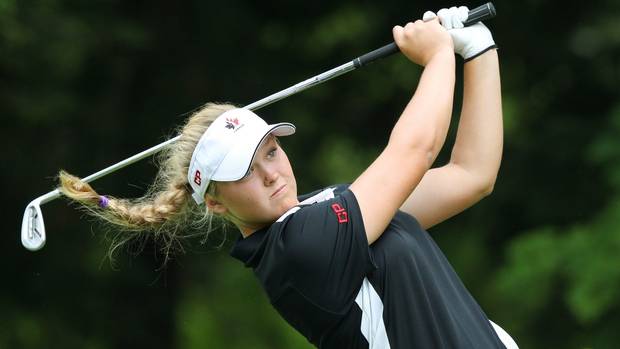 Defending champion Brooke Henderson of Canada shot 2-under-par 70 to take a two-stroke lead over Mariajo Uribe of Colombia into the final round of the LPGA Cambia Classic at Columbia Edgewater Country Club in Portland, Ore.

However, the 18-year-old wasn’t all that pleased.

“I played pretty awful today,” said the Henderson, who is No. 2 in the Rolex Women’s World Golf Rankings after winning the Women’s PGA Championship last month at Sahalee. “I definitely want to play better (Sunday). I hit a lot of good shots; I just didn’t capitalize on my chances.

“The course has changed so much since the beginning of the week. It’s so firm and fast right now. But I still like my game plan. There are definitely still a lot of birdie opportunities out there. If you’re hitting the ball well and to the right spots, you can still shot a low score. You just have to be careful of the conditions.”

Uribe, a two-time All-American at UCLA who has not won in sixth seasons on the LPGA Tour, overcame a double-bogey 5 on the 13th hole in a 71, while Suzann Pettersen of Norway, a two-time winner of the Portland tournament, struggled to a 74 and fell four shots back into a tie for third with Austin Ernst, who won the tournament in 2014.

“I’ve been putting well all week,” Uribe said. “My ball-striking hasn’t been great, and today was definitely not good, but I was able to save it (with her putting).

“It’s nice to play with somebody like Brooke, who is so young and aggressive. I love match play, so today I went out with the mentality of playing against her and staying alive until (No.) 18.”

Lee Lopez posted a bogey-free 69 and was another stroke back in solo fifth, while Stacy Lewis had seven birdies in a 68 was six strokes back in a tie for sixth with Cheyenne Woods who carded a 69, and Carlota Ciganda of Spain, who came in at 70.