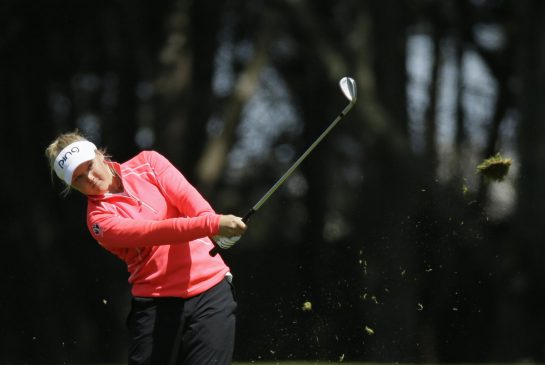 Rookie Brooke Henderson of Canada made bogeys on the last two holes but still shot even-par 72 on Saturday and took a one-stroke lead over Morgan Pressel and Min Seo Kwak of South Korea into the final round of the Swinging Skirts LPGA Classic at windy, chilly Lake Merced Golf Club in San Francisco.

The 17-year-old Henderson, who took the lead with a second-round 65 in her second PGA Tour event as a pro, showed the poise of a veteran for most of the day and was 2-under for her round with only one bogey through 16 holes and held a four-stroke lead at one time.

“If someone told me at the beginning of the week I would be leading going into the final round, I would’ve taken it,” said Henderson, who won the individual title in the 2014 World Amateur Championships while leading Canada to a runner-up finish. “Overall it was a great day, and I’m really happy to be where I am.

Henderson has no status on any pro tour, although she has won twice on mini-tours this season after turning pro following three victories on the CN Canadian Women’s Pro Tour as an amateur.

Pressel, who won the 2007 Kraft Nabisco and the 2008 Kapalua LPGA Classic but is winless since, birdied four of the last six holes to shoot 67, while Kwak, who won twice on the Symetra Tour last season, had an eagle and five birdies in an up-and-down round of 69.

Defending champion and top-ranked Lydia Ko of New Zealand, who turned 18 on Friday, posted a 71 and was three shots behind in solo fourth, while third-ranked Stacy Lewis also carded a 71 and was one more shot behind in a tie for fifth with fifth-ranked Shanshan Feng of China, who had another 71.

Seventh-ranked So Yeon Ryu of South Korea shot 71 and was five shots behind in solo seventh, while Sandra Gal of Germany totaled 72 and was another shot back in a tie for eighth with Sei Young Kim of South Korea, who came in at 70.