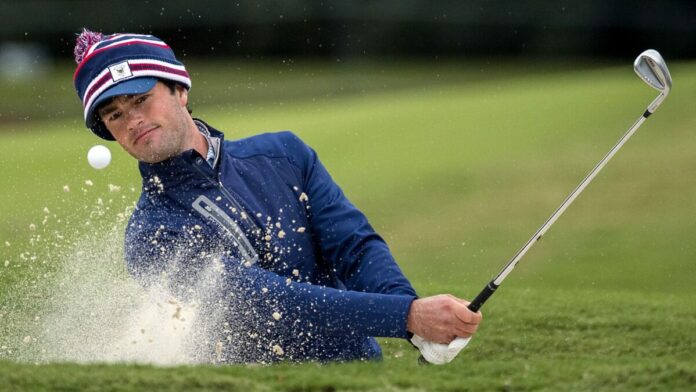 Rookie Cole Hammer missed the cut in his first six events on the PGA Tour and is only playing this week because he received a Sponsor’s Exemption. But, oh, did he play.

The 23-year-old Hammer, who helped Texas win the NCAA Championship earlier this year, shot an 8-under-par 64 on the Plantation Course to take a one-stroke lead over Ben Griffin after the first round of the RSM Classic in cold and windy conditions at Sea Island Resort in St. Simons, Ga.

“I missed my first six cuts in a row, it was a pretty dark period,” said Hammer, who ended that streak by shooting 65 in the second round of the Cadence Bank Houston Open last week on his way to a tie for 27th. “I felt like my game was close enough. I was just putting so much pressure on myself early in the tournament and putting myself behind the 8-ball. I did it in Houston again, and then came out with that 65 to make the cut. That really spiked my confidence.

“In Houston I just relaxed, took a deep breath and I made some birdies. I basically just told myself that I can come back and nobody plays perfect golf and that’s what I was trying to do. I was batting zero on the PGA Tour. I needed to get that monkey off my back. To do that in my hometown event in Houston was huge for me.

“It was really cool (on Thursday) looking at the top of the leaderboard and seeing my last name there.”

Hammer, who doesn’t even have full playing status on the Korn Ferry Tour, started at No. 10 and made four birdies on the back nine before adding five coming home on the front nine. He made his only bogey at No. 8 after hitting his drive into the trees, before sinking a clutch seven-foot par putt on his last hole.

Griffin, who lives in St. Simons and is coming off a tie for third in the Butterfield Bermuda Championship and a tie for 16th in Houston, carded a bogey-free 65 on the Plantation Course, with four birdies on the front nine after making three on the back.

“It’s an easy commute; I should have walked,” said Griffin, who claimed his only professional victory came in the 2018 Staal Foundation Open on the PGA Tour Canada, and almost didn’t play because he was sick early this week. “A couple stop lights held me back this morning.

“I tried to sleep most of the day Tuesday but probably only got two hours. Tuesday was strictly just a rest day and I didn’t really get off my couch except to go shower at the Sea Island spa because my roommate didn’t pay the water bill, so we didn’t have any water, so I couldn’t shower.

“I hit some balls on Wednesday, but didn’t feel like I was hitting it that great, then went back (Thursday) morning … and felt really good after the practice session, hit balls for like five minutes, teed it up and here we are.”

Beau Hossler of Rancho Santa Margarita carded a bogey-free, 6-under 64 on the Seaside Course and is tied for third with Callem Tarren of England, who also had a 64 on the Seaside, and Justin Suh of San Jose and USC, who totaled 6-under 66 on the Plantation Course.

Webb Simpson made a hole in one from 219 yards on the third hole with a 4-hybrid club in his 5-under 67 on the Plantation, which was matched by Brian Harman, Stephan Jaeger of Germany, David Lingmerth of Sweden, Alex Smalley, Keith Mitchell, Henrik Norlander of Sweden, Russell Knox of Scotland and Harry Higgs.

“My target was about 15 feet right of the hole there, so I did pull it, but I did hit it good enough to where I knew it would cover on that line,” said Simpson, who collected the fourth ace of his PGA Tour career. “And I do love my hybrids.”

Also in the tie for sixth are Andrew Putnam of Pepperdine and Chris Gotterup, who both shot 5-under 65 on the Seaside Course.