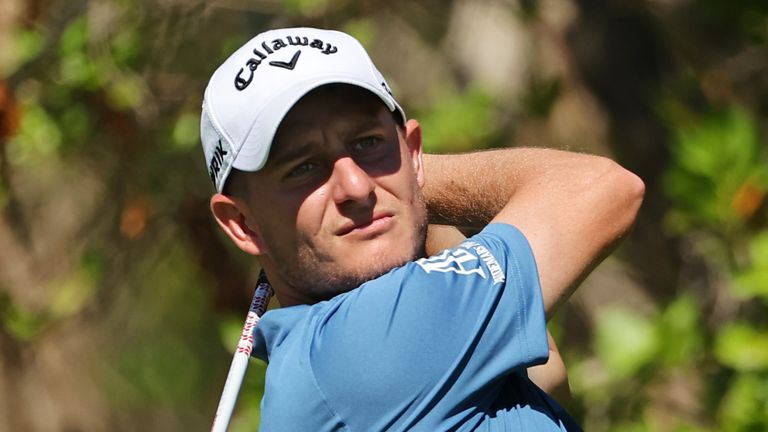 Emiliano Grillo of Argentina held onto his lead after the third round of the Mayakoba Golf Classic, but now he has several players breathing down his neck.

Grillo, who led by four strokes at the start of the day, carded a 3-under-par 68 and saw his lead shrink to one shot over Tom Hoge at El Camaleon Golf Course in Playa del Carmen, Mexico.

“I’m in the same position I was at the start of the day, in the lead, and that’s the idea,” said Grillo, whose only PGA Tour victory came five years ago in what is now the Safeway Open at Silverado in Napa. “Every day is the same, and it’s just that simple, do your best.

“That’s the plan for tomorrow, to play the best I can and see if it’s good enough. It was a fun day today and that’s what I’m hoping for again tomorrow. I just have to try to keep playing the way I have been and finish with the lead.”

Grillo, who has won three times as a pro including the 2015 Web.com Tour Championship, started fast in the third round with three birdies on the first seven holes and made his only bogeys at Nos. 10 and 12 before collecting two more birdies coming home to record a 54-hole score of 16-under 197.

Hoge, whose only pro victory came in the 2011 Canadian Tour Players Cup, pulled out of the pack chasing Grillo with five birdies on the last six holes to shoot 65, while Viktor Hovland of Norway is two strokes back in third after a 63 with four birdies down the stretch, followed one more down by Adam Long, who collected seven birdies on the front nine in another 63.

“It’s hard to win and a I realize that even after winning my first one,” said the 23-year-old Hovland, who captured the Puerto Rico Open early this year. “There’s a lot of pressure and you can be right in there, but make a couple of bad shots and it can take you out of it.

“The things that I have been working on have come to fruition, I feel good about the things I am doing and the way I am playing. I’ve been doing good stuff and it’s a nice feeling.”

Third-ranked Justin Thomas collected nine birdies to post the low round of the day at 62 and is four behind in a tie for fifth with Patrick Rodgers of Stanford, who posted a bogey-free 65.

“I just played solid,” said Thomas, who is seeking his third victory of 2020. “I hit the ball just as well yesterday, but wasn’t comfortable on the greens and didn’t make any putts. The greens were better today and I took advantage of that.

“I just have to go out and make as any many birdies as I can to shoot another low one tomorrow.”

Tony Finau was right on Grillo’s tail when he made a hole-in-one on the 116-yard fourth hole and added three birdies on the next four holes, but he didn’t make another birdie the rest of the day.

Finau’s 69 left him five shots back in a tie for seventh with Aaron Wise of Lake Elsinore, who holed out from the fairway for an eagle at No. 13 in a 67, and first-round leader Russell Knox of Scotland, who had a bogey-free 68.

Defending champion Brendon Todd totaled 67 and is in a tie for 11th that includes local favorite Carlos Ortiz of Mexico, who also had a 67, while rookie Andy Ogletree, making his pro debut after being low amateur in the Masters last month and winning the 2019 U.S. Amateur Championship, is tied for 28th after a 70.