Hovland Wins Mayakoba With Birdie on 18 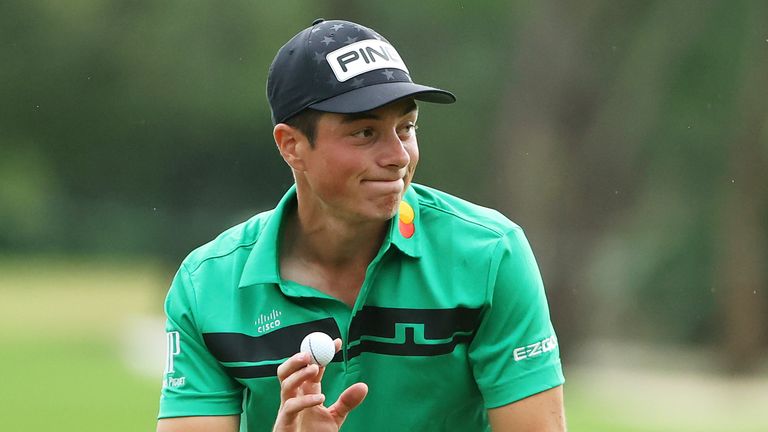 Viktor Hovland of Norway claimed his first victory on the PGA Tour early this year with a birdie on the final hole of the Puerto Rico Open, and did the same in the Mayakoba Golf Classic.

The 23-year-old Hovland sank an eight-foot birdie putt on the 18th hole to cap a 6-under-par 65 and beat Aaron Wise of Lake Elsinore by one stroke at El Camaleon Golf Club in Playa del Carmen, Mexico.

“It feels really cool to have a chance to win and be able to close it out,” said Hovland, who won the 2018 U.S. Amateur and held the No. 1 amateur ranking in the world. “In college and amateur golf, I sometimes had a problem with that, so this makes me feel good.

“I got off to a good start and took the lead, but in the middle I was just making pars and some of the other guys got closer. The birdie on 14 was good and the par save on 16 was big. And then I had the one on 18 and made it.

“I just want to keep getting better and have more moments like that.”

Hovland, who took the lead with four birdies in the first six holes, made his only bogey in the final round at No. 12 and added three birdies coming home to post a winning score of 20-under 264.

Wise, whose only PGA Tour victory came in the 2018 AT&T Byron Nelson, holed out for an eagle on the seventh hole and collected three birdies on each nine in his bogey-free 63.

Adam Long made three straight birdies early on the back nine in a 67 and finished three shots back in a tie for third with Tom Hoge, who made only one bogey in his 69.

Harris English, who won the 2013 Mayakoba Classic, closed with a 63 that included an eagle on the fifth hole and was four down in a tie for fifth with Billy Horschel, who eagled the 13th hole in a 64, and Lucas Glover, who made his lone bogey on the last hole of a 66.

Emiliano Grillo of Argentina, who led after the second and third rounds, could manage only two birdies in a 72 and wound up five shots behind in a tie for eighth with defending champion Brendon Todd, who totaled 66, Tony Finau, who finished at 67, and Carlos Ortiz of Mexico, who came in at 66.

Third-ranked Justin Thomas shot 69 and finished in a tie for 12th that included Max Homa of Valencia and Cal (65), Maverick McNealy of Portola Valley and Stanford (66), Abraham Ancer of Mexico (66) and amateur Austin Eckroat (65).