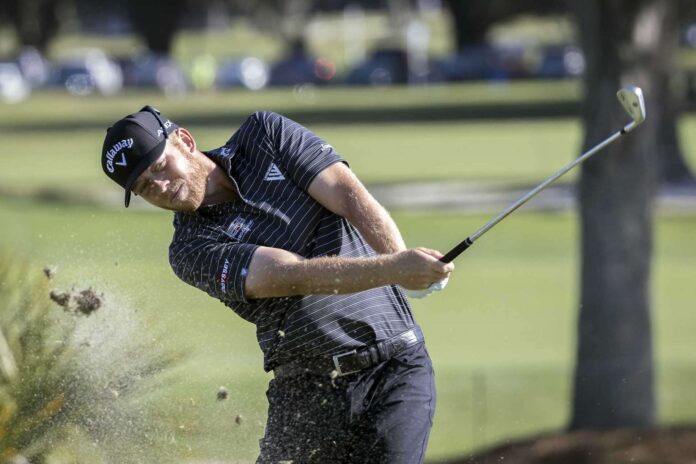 Talor Gooch keeps knocking on the door for his first PGA Tour victory and he’s at it again.

The 30-year-old Gooch sank a 66-foot eagle putt on the seventh hole on his way to a 5-under-par 65 in breezy conditions on the Seaside Course and leads John Huh and Sebastian Munoz of Colombia by one stroke midway through the RSM Classic at Sea Island Resort in Sea Island, Ga.

Every player in the field played the Seaside and Plantation courses once each in the first two round, but the last two will be played entirely on the Seaside Course.

“We didn’t even think I knocked it on the green, got up there and thought it was going to be just a little short and it’s on,” Gooch, who won the 2017 New Sentinel Open on the Korn Ferry Tour, said of his eagle on No. 14. “It’s a tough green. Any 66-footer, you’re just trying to two-putt, right, but my speed’s been pretty good this week and I actually made about a 50-footer yesterday.

“It’s just comfortable, man. I’m playing well, but I think my game has made a turn for some good stuff in some ways. I’ve been working my butt off for years, but especially the last six, eight months with driving the ball and working my butt off with putting.

Gooch, who tied for fourth in the Fortinet Championship in Napa, tied for fifth in the CJ Cup and tied for 11th in two other events early this season, had four birdies and one bogey other than his eagle and recorded a 36-hole score of 13-under 129.

Huh, from Los Angeles and Cal State Northridge, had four of his six birdies on the back nine while shooting 5-under 67 on the Plantation Course, while first-round leader Munoz holed out for a birdie at No. 9 while finishing off his 2-under 70 on the front nine of the Plantation.

“That was a good score in these tough conditions,” said Huh, who captured the 2012 Mayakoba Golf Classic and was PGA Tour Rookie of the Year that season, and tied for 15th at Mayakoba two weeks ago.

“I’ve been working really hard lately, just basic stuff, alignment, grip, make sure I shorten my swing a little bit. I think that is really helpful for me so I don’t lose balance. Just like to stick with that next two days, it will be fun.”

Said Munoz, who won the 2019 Sanderson Farms Championship: “Ten strokes worse than yesterday, but it felt really good. I feel like today the thing was patience. We know it was going to be hard to hit the right distance or the right lines.”

Taylor Moore made a hole in one from 179 yards on the 17th hole of the Seaside Course while shooting 5-under 65 and is two shots back in a tie for fourth with 2016 RSM Classic champion Mackenzie Hughes of Canada, who had a 2-under 68 on the Seaside.

Ninth-ranked Louis Oosthuizen of South Africa, the highest-ranked player in the field, withdrew before the start of round two because of a lower back injury after opening with a 1-under 69 on the Seaside Course.

This is the ninth and final event of the Fall portion of the 2021-22 PGA Tour, which will shut down except for unofficial holiday events until the Sentry Tournament on the first week of January at Kapalua Resort in Maui, Hawaii.