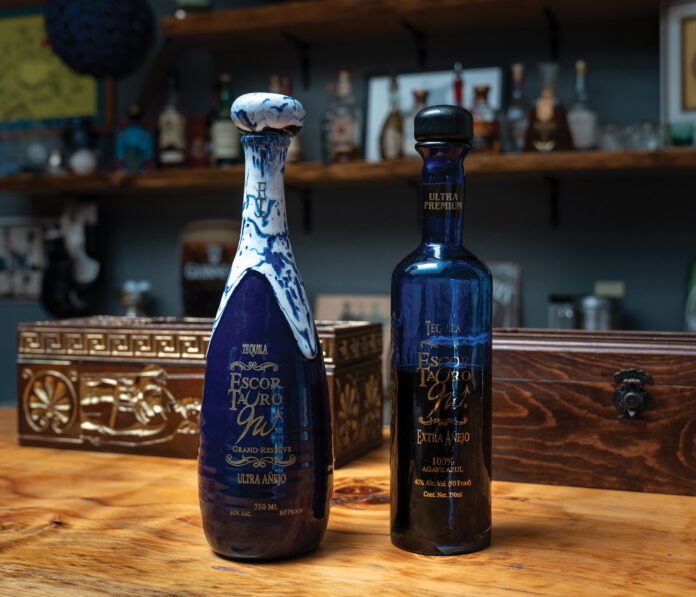 Alex Malpica is releasing a bottle of tequila that has been a long time coming: a 12-year-aged Ultra Anejo. The “Escor Tauro 12-year” is being sold at $1,600 per bottle and consists of a supply of only 120 bottles.

It would be unjust to go into depth on the crafting process of this Anejo without first going back a couple of generations to where it all started. Alex’s grandfather, Angel Malpica, was working in freight cargo management during the Mexican Revolution when various rebel groups took over the rail lines to control shipments of ammunition and goods.

Angel was given the responsibility of overseeing all of the shipments of tequila that were to be sent to soldiers to be utilized as “liquid courage”. It was during these times that Angel began experimenting with making tequila and discovered his own niche of achieving the Malpica’s signature flavor by infusing an array of dried fruits and spices.

Alex always watched his grandfather engage in his craft, but it wasn’t until he owned his restaurant – La Bufadora Tequila– that he began making the tequila himself. Alex always kept a small supply of his grandfather’s recipe to serve to family and friends visiting his restaurant, and it wasn’t long before they’d be coming back for more–inspiring Alex to begin making the tequila himself.

Alex never changed Angel’s recipe. Instead, he expressed his creativity by experimenting with the aging process. Alex ages his tequila in a diversity of oak barrels to achieve a flavor that is both smooth and elaborate. The Escor Tauro 12-Year was aged in American Oak for eight years, French Oak for three, and finished off in a Bordeaux cask for a year. Alex chars his barrels so that, as the seasons change, the temperature differences cause the wood to expand and contract, releasing oils from the charred wood into the tequila making it very smooth with a dark color.

Despite its name, the Escor Tauro 12-Year has gone through a much longer process than suggested. Alex lets his Agave Plants grow for ten years before he harvests them in the late fall while the concentration of sugar is at its highest, and in regard to the aging process, Alex jokingly admitted, “Actually, it’s been thirteen years, but thirteen is not a good number to put on the bottle.”

So when Alex went to label and distribute his product, he decided that reaching out to a ceramist in San Diego to hand-make every bottle would help give the presentation that he felt his tequila deserved. With each bottle being different from the last, the effort to preserve the same homemade aesthetic that the Malpica’s tequila is rooted in is kept alive.

In addition to the 12-year Ultra Anejo, Alex released a 5-year Extra Anejo that’s aged 4 years in American Oak and 1 year in used French Bordeaux casks. Only 210 bottles were produced, both tequilas are being distributed in the Untied States