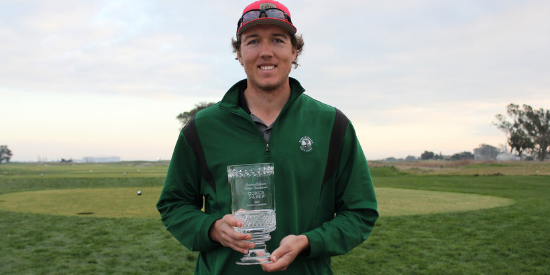 Beau Forest of Redding held on to win the Amateur Golf.com Winter Invitational presented by Callaway Golf by one stroke over Nate Jetter of Pleasant Hill and Kristian Bressum of Denmark on the South Course at Corica Park Golf Complex in Alameda.

Forest, who played golf at University of the Pacific in Stockton, took the lead with an eagle on the 15th hole in round one and despite two late bogeys in round two claimed the victory with a score of 68-71—139, 5-under-par.

“My ball-striking was really good,” said Forest, who also made an eagle on his first hole of the tournament. “I think that’s the best I’ve hit it in a while, so that helped. I just tried to get the ball down there as far as I could to leave a shorter club in. I played aggressively on the par-5s because they’re all fairly open. That was the game plan.

“This is probably the third or fourth year I’ve played in this tournament, so it’s the sixth or eighth time I’ve played the course. Knowing where to hit it helps a lot out here, especially with the greens to know the angles.”

Craig Miyamoto of Sacramento carded a score of 74-73—147, 2-over, to tie for first in the Senior Division with Gomer Piercy of Aptos, who shot 72-75—147, and Miyamoto claimed the title with a par on the second playoff hole.

“I tried to remain present,” said Miyamoto, who bounced back after making two early bogeys in the final round. “I made a couple birdies after that and it gave me a little more confidence.”