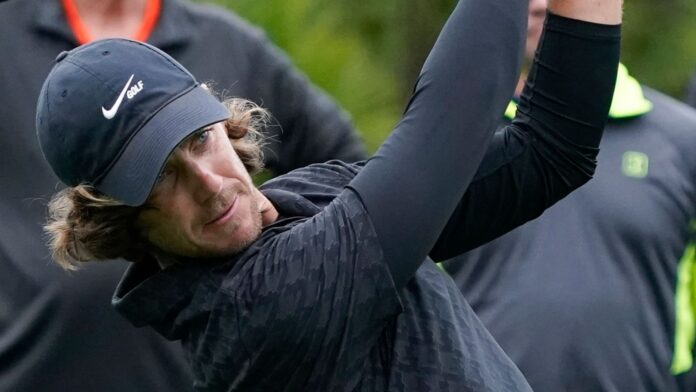 Tommy Fleetwood of England finished in the sunshine and Tom Hoge wound up in the dark, but they ended the day in the same place—atop the leaderboard.

Fleetwood (pictured) and Hoge shot 6-under-par 66s to take a one-stroke lead over four players after the incomplete first round of 48th Players Championship on the Stadium Course at TPC Sawgrass in Ponte Vedre Beach, Fla.

Play was delayed for an hour at the start and then halted for move than four hours in the middle of the day, and 12 of the 144 players in the field never even teed off. There will be 75 players returning in the morning to complete the first round, but more rain is expected and there is a distinct possibility that the tournament will stretch into Monday.

Fleetwood, who has eight pro victories but has struggled in the last year or so, collected seven birdies against a single bogey in his 66, while Hoge, who won the AT&T Pebble Beach last month, chipped in for an eagle from 41 feet on the second hole and also carded a single bogey.

“This golf course has always been one of my favorites,” said Fleetwood, who hasn’t won since the 2020 Aberdeen Scottish Open. “You get rewarded for good shots and I’ve gotten used to playing here with some good years. But, naturally, the course has gotten me a few times as well.

“I have been struggling for a while but I’m going to keep playing as much as I can because I feel. I am playing better. My pitching and putting was very good today, and I feel like I didn’t miss anything there.

“I feel I am driving the ball better, but have to keep improving and I am going to be playing a lot because I want to keep getting better.”

Said Hoge, who sank a five-foot eagle putt at No. 12 and also made only one bogey: “I’ve been hit-and-miss lately, missing a couple of cuts, but I always look forward to playing at Bay Hill and the Players back-to-back. I hit the ball well and was excited to get back out there after the rain delay, but I went inside and watch TCU, my alma mater, play basketball on TV and it was fun. I don’t know if we are going to get in 72 holes, but I just want to go out there and play well.”

Keith Mitchell holed a 21-foot eagle putt at No. 9 and was tied for the lead before making his only bogey on the last hole in a 67 and is tied for third with Joaquin Niemann of Chile, who birdied his last three holes, Kramer Hickock, who made two late birdies in a bogey-free round, and Anirban Lahiri of India, who holed out for an eagle from 125 yards on the sixth hole.

Left-hander Brian Harman and Sam Burns each had four birdies on their back nines to shoot 68 and are tied for seventh with Abraham Ancer of Mexico, who holed a six-foot birdie putt on the last hole, and Taylor Pendrith of Canada, who was a bogey-free 4-under through 16 holes when the end came.

Top-ranked Jon Rahm of Spain birdied two of the last three holes for a 69 and is tied for 11th that includes 10th-ranked Cameron Smith of Australia, who had a single bogey, 2020-21 PGA Tour Rookie of the Year Will Zalatoris, who stumbled to a double bogey on the last hole and, Harold Varner III, who was 7-under and held a two-stroke lead before hitting into the water off the No. 17 island green to make a triple-bogey 6 before closing  with a bogey.

Fourth-ranked Patrick Cantlay totaled 72 and was in a tie for 68th that included Rory McIlroy of Northern Ireland and eighth-ranked Justin Thomas, the defending champion, who both were even par through two holes, while seventh-ranked Xander Schauffele of La Jolla and San Diego State was 1-over after three holes and tied for 99th.