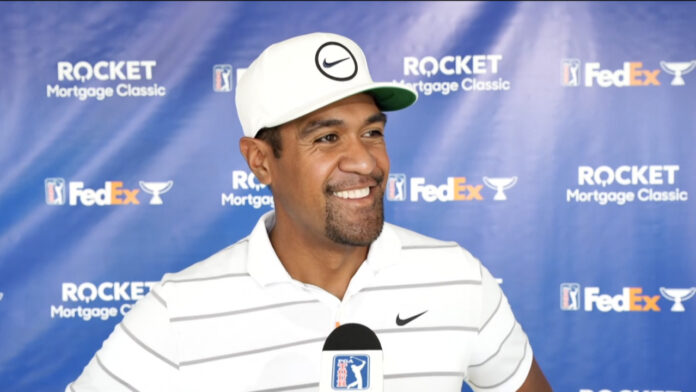 Finau, who won the 3M Open last week, posted a bogey-free, 8-under-par 64 and is tied for the lead with rookie Taylor Pendrith of Canada after the opening round of the Rocket Mortgage Classic at Detroit Golf Club in Detroit, Mich.

“Obviously 64 is a very good round,” said Finau, who also won the 2016 Puerto Open and the 2021 Northern Trust on the PGA Tour. “But this is a golf course where a lot of guys are going to make birdies, so anytime you can get off to a fast start, I think it’s much needed on a golf course like this.

“My last shot lacked a lot of conviction. I wanted to at least get it to the hole, give it a shot. A few of my putts were like that out there, just left them right in the heart a little short. I wasn’t super happy that I left it short, but overall it was a nice round.

“Obviously, I was on a high coming off of last week, but every week is different, although I felt very good out there again today.

Finau left a 19-foot birdie putt short while finishing on the ninth hole to miss tying the tournament record of 63, but that came after he birdied five of the first eight holes when he opened on the back nine and he added three more birdies coming home on the front.

Pendrith, who lives a 3½-hour drive from Detroit and claimed his only professional victories in 2019 on the PGA Tour Canada, also started at No. 10 and made four birdies before taking his lone bogey at No. 18, before collecting five birdies in the first seven holes of the front nine en route to his 64.

“Honestly, for me, it’s just really nice to be back playing healthy,” said Pendrith, who sustained a rib injury in March and was our for five months before he tied for 13th in the Barbasol Championship and tied for 11th in the Barracuda Championship in his first two starts since returning earlier this month.

“When I’m healthy, I can compete with the best. Other than the injury, it’s been a great rookie year on the PGA Tour so far and it’s just nice to be back. With family and friends here, this feels like it’s a home game.”

Cameron Champ of Sacramento, who has won three times on the PGA Tour, made five birdies on his back nine in a 66 and is tied for third with Webb Simpson, the 2012 U.S. Open champion who played bogey-free, Michael Thompson, who had seven birdies, Lee Hodges, who holed out  from 95 yards for eagle on the 14th hole, and Matt Wallace of England, who also had seven birdies.

Mark Hubbard made a hole in one on the 216-yard 11th hole in a 68 and is in a tie for 22nd that includes defending champion Cam Davis of Australia, who played bogey-free, while former world No. 1 Jason Day of Australia totaled 69 and is tied for 34th, and fourth-ranked Patrick Cantlay of Los Alamitos and UCLA is tied for 53rd at 70.