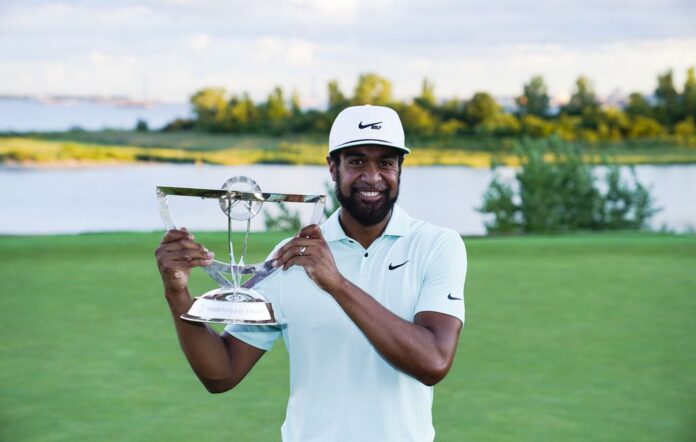 Tony Finau won for the first time in five years and chased down top-ranked Jon Rahm of Spain to do it.

The 31-year-old Finau made par on the first playoff hole to turn back Cameron Smith of Australia, who hit his drive out of bounds and didn’t even finish the hole, after Rahm faded to third in the closing holes of regulation in The Northern Trust, the first event of the FedEx Cup playoffs at Liberty National Golf Club in Jersey City, N.J.

The final round was postponed on Sunday, which led to the Monday finish after Tropical Storm Henri dropped nine inches of rain on the course, but incredibly the grounds crew got the fairways and greens into great shape for the last 18 holes.

Finau, who finished in the top 10 in 39 tournaments including eight seconds since winning 143 starts ago, took the lead in the FedEx Cup point standings heading to the BMW Championship, which starts Thursday at Caves Valley Golf Club in  Owings Mills, Md.

Only the top 70 in the point standings will play this week, with the top 30 after the BMW Championship making it to the Tour Championship next week at East Lake Golf Club in Atlanta.

“I’m just speechless, it feels amazing,” said Finau, whose only other PGA Tour victory came in the 2016 Puerto Rico Open at Coco Beach. “I was playing well told myself to just keep going. At No. 10, I told myself that I had to get to 20-under par and played my best nine holes of the week and was able to do it.

“I just kept on fighting all the way to the end and got it done. It’s great to be standing here having won another tournament. I was playing against the best player in the world, Jon Rahm, and was able to beat him.

“I proved I have what it takes and was able to do it under immense pressure. I’m super excited.”

Finau sank a three-foot eagle putt on the 13th hole and added three birdies on the back nine to shoot 65 and finish 72 holes at 20-under 264, which Smith matched minutes later with a 67 that included four birdies on a flawless back nine.

Smith, who has won three times on the PGA Tour and five times as a pro, missed a 21-foot birdie putt on the final hole of regulation that would have given him the victory.

“I just made a terrible swing on that drive in the playoff,” said Smith, who won the 2020 Sony Open in Hawaii in a playoff against Brendan Steele. “It was a total mis-hit, the wind got it and took it out of bounds. I made some other bad drives this week and got away with them, but not that one.

“But my game is there overall, so I just have to straighten that out and keep on going.”

Rahm, coming off his second bout with Covid-19 after winning the U.S. Open and tying for third in the Open Championship at Royal St. George’s, held the lead until the closing holes after being on top since a first-round 63. He made two bogeys on the back nine and missed several makeable birdie putts to finish two strokes back in third after a 69.

Erik van Rooyan of South Africa hit two balls into the water to make a quadruple bogey-7 at No. 11 but sank a three-foot eagle putt two holes later on his way to a 72 and finished six down in solo seventh.

Ninth-ranked Patrick Cantlay of Los Alamitos and UCLA tied for 11th after a 68, and Olympic Gold Medalist Xander Schauffele of La Jolla and San Diego State closed with a 71 to wind up in a tie for 16th.

Sixth-ranked Bryson DeChambeau of Clovis shot 68 to finish in a tie for 31st that included eighth-ranked Brooks Kopeka, who struggled to a 74, and 10th-ranked Harris English, who had a 69, while Masters champion Hideki Matsuyama of Japan tied for 43rd following a second straight 70.