Dufner bounces back, wins Memorial by 3 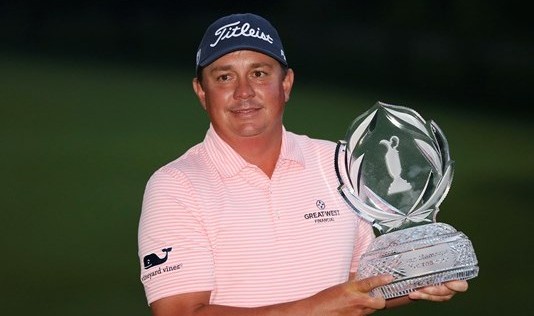 Jason Dufner had a forgettable third round, so he simply forgot it.

Dufner, the 2013 PGA champion, bounced back with a 4-under-par 68 in the final round to claim a three-stroke victory over Rickie Fowler and Anirban Lahiri of India in the Memorial Tournament at Muirfield Village Golf Club in Dublin, Ohio.

“Today was nice, yesterday was not nice,” said Dufner, who earned his fifth PGA Tour victory. “But to rebound from it, I think that makes me really proud to grind through it. You have a lot of setbacks out here on the PGA Tour.

“To rebound from it and give myself a chance to win, I was going to be proud whether I won today or not because I got back in contention and that’s what all of us want to do come Sunday on the PGA Tour.”

Dufner, who held a five-stroke lead after 36 holes at 65-65–130 before shooting 77 on Saturday, regained the lead with four birdies on the back nine in the final round and then sank a 33-foot par putt on the final hole to finish at 13-under 275.

Then he received the traditional champion’s handshake from tournament host Jack Nicklaus.

Lahiri closed with a bogey-free 65 that was the low score of the day, while Fowler, from Murrieta, fell back with two late bogeys and finished at 70.

Justin Thomas, who has won three times this season, shot 72 and was four shots back in a tie for fourth with Matt Kuchar, who had a 73, while James Hahn of Alameda and Cal posted a 69 to finish another stroke back in a tie for sixth with Kevin Kisner (70), Kyle Stanley (68) and Bubba Watson (74).

Third-round leader Daniel Summerhays, seeking first PGA Tour victory, struggled to a 78 and wound up six behind in a tie for 10th with Graham DeLaet of Canada, who totaled 68, and Jamie Lovemark of Rancho Santa Fe and USC, who came in at 73.

Defending champion William McGirt stumbled to an 83 and tied for 67th.