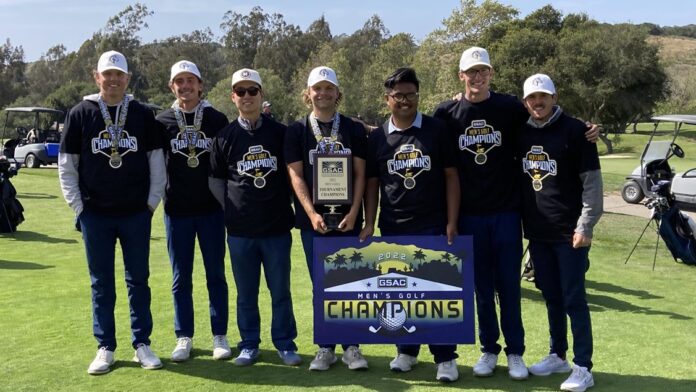 Jack Dudeck of the Master’s College in Santa Clarita captured the Golden State Conference Championship for the second straight season and led the Mustangs to the team title by nine strokes over Ottawa University of Arizona at La Purisima Golf Club in Lompoc.

“Before we teed off this morning, I told the guys that it was our time,” Master’s Coach Jacob Hicks said. “From the beginning of this week in the practice round, I just knew the guys were locked in.

“We’ve been preparing so hard for this and I’m just praising God for allowing us to come through in the clutch, and really see some of our hard work pay off. He’s the one who has to bless your efforts and he’s been so kind to us this week.”

Dudeck, a senior from West Ranch High School in Stevenson Ranch, claimed his third victory of the season and sixth of his career, with a score of 73-76-71—220, 4-over.

“I really wanted it for the team more than myself because I know how much fun I had last year,” said Dudeck, who was the only player for the Mustangs to compete in the NAIA Men’s National Championships last season.

“One of the reasons I got this sweatshirt (from the NAIA tournament) last year was to wear it around the team to make sure they saw it and I could tell them how fun it was, so that they had that motivation to keep going and to keep pushing.

“Our goal was to win the conference championship and get to the national championship. I wanted it to motivate the team and I think it did its job.”