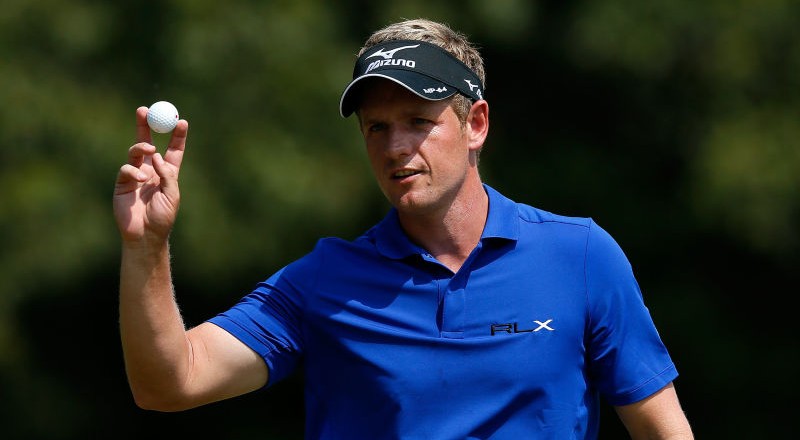 Luke Donald has had great success in the RBC Heritage without winning, and he’s right back at the top of the leaderboard.

Donald, the former world No. 1 from England, chipped in from 43 feet for a birdie after missing the 18th green with his approach and shot 4-under-par 67 to tie Graham DeLaet of Canada for the lead after two rounds at Harbour Town Golf Links.

“It was a little bit of a struggle today, but my short game certainly bailed me out,” said Donald, who has finished second four times and third twice in the Heritage. “Obviously, it wasn’t a great second shot (on No. 18), bounded out to the right. But the grass is really nice, so you can really get it to nip and I just played it perfectly.

“The greens are very small and you’re not going to hit all of them, so you need to be good around the greens. I proved that the last couple of holes.”

DeLaet, who is making 160th career start on the PGA Tour without a victory, wedged his second shot into the hole from 109 yards on the ninth hole in his own 67.

“I had a nice little stretch in the middle of my round,” said DeLaet, who has finished second three times in his PGA Tour career. “I birdied eight, then there was the (eagle on the ninth). At 10, I missed an eight-footer for birdie, and I birdied 11 and 12.”

Ian Poulter of England, who is in danger of losing his PGA Tour card if he does not finish well in his next two events, totaled 68 and is two strokes back in a tie for third with Webb Simpson, the 2012 U.S. Open champion, who also had a 68.

Pat Perez of San Diego posted a 67 and is another shot behind in a tie for fifth with first-round leader Bud Cauley, who finished at 72, Jason Dufner, who recorded a 67, Nick Taylor of Canada, who wound up at 66, and Sam Saunders, who came in at 70.

Patrick Cantlay of Los Alamitos and UCLA recorded a 66 and is four strokes down in a tie for 10th with Wesley Bryan (67), Russell Knox (66) of Scotland, William McGirt (68), Kevin Kisner (64) and Ollie Schneiderjans (68).