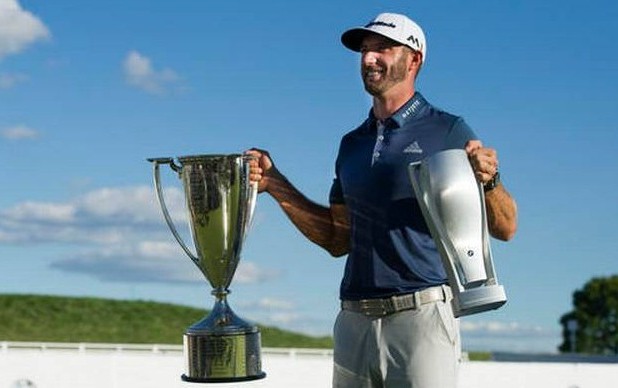 Dustin Johnson has it all going right now.

Johnson excelled in every phase of the game while shooting 5-under-par 67 to win the BMW Championship by three strokes over Paul Casey of England at Crooked Stick Golf Club in Carmel, Ind.

“I have a lot of confidence in every part of my game right now,” said Johnson, one of the best ball-strikers in the game who put a new putter in his bag at the start of the tournament. “I played really solid.

“I’m was driving the ball nicely, hit some good iron shots and all the work I’ve put in on my wedge game this year has paid off. I put in that new putter and it really worked well.”

DJ, who has won three of his last eight starts including the U.S. Open and the WGC-Bridgestone Invitational to give him 12 PGA Tour victories, finished at 23-under 265 and took the lead in the FedEx Cup standings.

Casey, who also finished second to Rory McIlroy of Northern Ireland last week in the Deutsche Bank Championship, sank a 25-foot eagle putt on the 15th hole on his way to another 67 and moved to fifth in the point standings.

If one of the top five in the standings wins the Tour Championship in two weeks, he will win the FedEx Cup.

Roberto Castro closed with yet another 67 and wound up six shots back in third, climbing 32 places to 21st in the standings and into the top 30 that will play in the finale at East Lake in Atlanta.

Jordan Spieth, the defending FedEx Cup champion, finished ninth after a 69 and is seventh in the standings, Patrick Reed tied for 13th with a 68 and lost his points lead to Johnson but is second, and McIlroy dropped two places to sixth after tying for 42nd with a 72.

Top-ranked Jason Day withdrew after eight holes because of back tightness and slipped two spots to fourth in the standings.