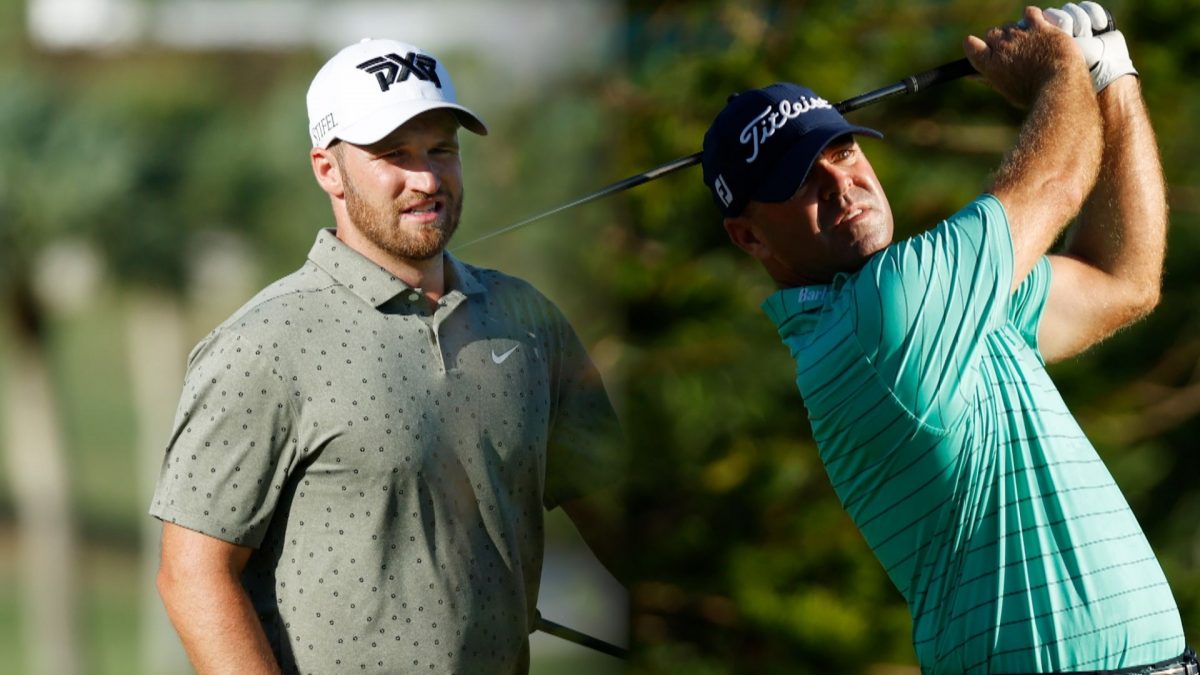 Wyndham Clark rode the wind to the top of the leaderboard in the Bermuda Championship.

The 26-year-old Clark, despite stumbling late in his round, shot 3-under-par 68 in wind gusts that surpassed 30 mph and is tied for the lead with Ryan Armour after two rounds at Port Royal Golf Club in Southampton, Bermuda.

“I’m not looking at those last two bogeys,” said Clark, who is seeking his first professional victory and is in the lead for the first time in 62 starts the PGA Tour. “I’m up there in contention and that’s all that matters.

“We all were hitting 6- and 5-irons into a par 3 from 160 yards, and I missed about a 5-footer. It’s bound to happen. If I didn’t bogey those (two), it would be one of the best rounds of my career. But it’s pretty hard to play a round with 30 mph wind and not make any bogeys.”

Clark (pictured, left), who won the 2017 Pacific 12 Conference Championship while playing at Oregon, sank a 34-foot eagle putt on the second hole and held the outright lead before making his only two bogeys at Nos. 7 and 8 while finishing his round on the front nine, recording a 36-hole score of 8-under-134.

Armour (right), 44, whose only PGA Tour victory came in the 2018 Sanderson Farms Championship, birdied three of the first five holes and after making three bogeys in the middle of his round, made another birdie at No. 17 on his way to a 70.

“I was glad to get off to a good start, but it’s definitely tough mentally because after you hit you’re trying to tell the golf ball what to do,” said Armour, whose only PGA Tour victory came in the 2016 Sanderson Farms Championship.

“I mean, I missed a three-footer for par when a gust of wind blew me off-balance. If anybody plays bogey-free today, I’ll be surprised. You just have to keep fighting it. I’m tired. Today was really hard.”

Kramer Hickock collected three birdies while finishing his 68 with a flawless back nine and is one stroke back in solo third, while Ollie Schneiderjans birdied the last two holes for a 70 and is two behind in a tie for fourth with Doc Redman, who had two birdies and two bogeys in a 71.

First-round leader Peter Malnati, who opened with a 63, struggled to a 74 and is one more down in a tie for sixth with 13-time pro winner Luke Donald of England (68), Denny McCarthy (67), Roger Sloan of Canada (70), Scott Piercy (70) and Kiradech Aphibarnrat of Thailand (66), who did play bogey-free and posted the low score of the day.

Three-time major champion Padraig Harrington of England is tied for 12th following a 71, while defending champion Brendon Todd stumbled to a 75 and missed the cut by three strokes.

Fred Funk, 64, who won the 2005 Players Championship among his eight PGA Tour victories, chipped in for a birdie while finishing his 72 on the ninth hole and is tied for 36th.

Henrik Stenson of Sweden, who won the 2016 Open Championship at Royal Troon, withdrew after nine holes because of a foot injury.

The wind is supposed to blow again for round three, but in the opposite direction.