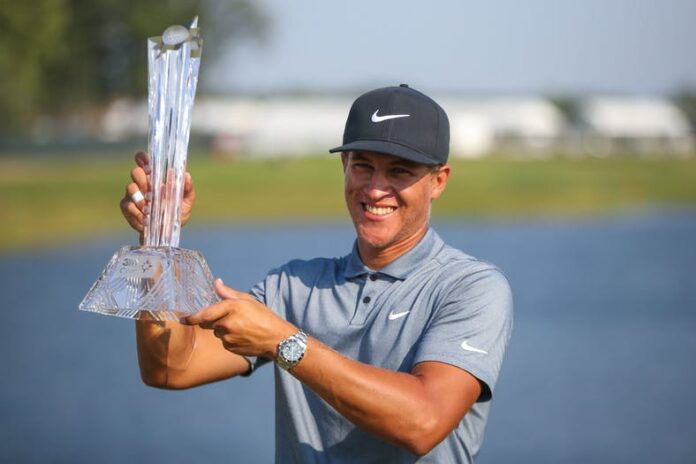 Cameron Champ of Sacramento is a winner on the PGA Tour again.

The 26-year-old Champ shot a bogey-free, 5-under-par 65 in the final round to claim his third victory by two strokes over ninth-ranked Louis Oosthuizen and Charl Schwartzel, both of South Africa, and Jhonattan Vegas of Venezuela in the 3M Open at TPC Twin Cities in Blaine, Minn.

“I didn’t make it boring,” said Champ, who hit a brilliant approach shot over the water to set up his three-foot par putt on the last hole, where a big number seemed possible after he hit a wild drive into the high weeds. “I’m going to hit driver on 18, that was our plan all week even though it’s a difficult driving hole. I had a bad drive but then hit a great approach shot to make it right at the end.

“I got dehydrated there for a while early on the back nine and really didn’t feel weak but was a little light-headed for a while before it cleared up. I just stuck with the game plan we had all week, played well and it worked out in the end.

“I’ve been a little frustrated with things the last couple years, but I think I figured out how to balance golf with life.”

Champ, who also won the 2018 Sanderson Farms Championship and the 2019 Safeway Open, made three birdies on the front nine and two more coming home, including 14-foot putt at No. 16, to finish at 15-under 269.

Oosthuizen, who tied for third in the 149th Open Championship last week at Royal St. George’s in England, birdied three of the last four holes to shoot 66, while first-round co-leader Vegas made two late birdies in a 68, and Schwartzel had three birdies on the back nine in another 68.

“I’m just trying to put together good results and I know eventually I will win again,” said Oosthuizen, who won the 2010 Open Championship on the famed Old Course at St. Andrews in Scotland. “I made some nice birdie putts on the back nine but missed a couple shorter ones that cost me. And I left one just short on 17.

“I finished with another birdie, but knew it wasn’t going to be good enough to win. I’m playing good golf right now and just have to keep scoring the way I am, and I will have some more opportunities to win.”

Keith Mitchell made all four of his birdies on the back nine in a bogey-free 67 to finish three shots back in solo fifth, while Mito Pereira of Chile also shot 67 and was four down in a tie for sixth with Adam Hadwin of Canada (68), Brian Stuard (69), Kyoung-Hoon Lee of South Korea (69) and Ryan Armour (70).

Patrick Reed, who is headed to Tokyo for the Olympic Games to replace Bryson DeChambeau who tested positive for Covid-19 and had to withdraw, closed with 71 and wound up in a tie for 24th that included first-round co-leader Rickie Fowler of Murrieta, who also finished at 71.

Defending champion Michael Thompson totaled 72 and finished in a tie for 39th that included 2019 3M Open champion Matthew Wolff of Agoura Hills, who came in at 73.