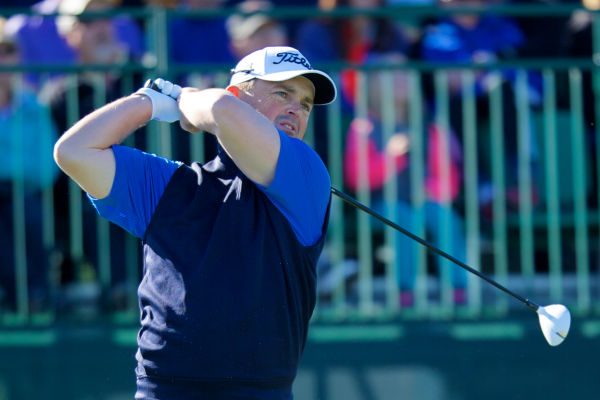 Greg Chalmers of Australia shot a 5-under-par 66 to take a one-stroke lead over Ricky Barnes and Freddie Jacobson of Sweden as tournament host Tiger Woods struggled to a 74 in the first round of the Quicken Loans National at Congressional Country Club in Bethesda, Md.

Woods, playing for the first time since back surgery on March 31, made bogeys on seven of his first 12 holes before rallying with three birdies on the last six.

Chalmers, who has won nine times as a pro but never on the PGA Tour, collected six birdies including three in a row to finish his round on the front nine.

“I’m pleased because I made a lot of putts and you have to do that out here to shoot a low score,” said the left-handed Chalmers, who needed only 25 putts in his round. “But I hit almost every fairway and most of the greens, and was able to save for par when I missed. And it was nice to finish with three straight birdies.

“You don’t want to be in this rough because it’s nasty. I was in there twice and could only lay up, but was able to get up-and-down for par. But I mostly struck the ball well and putted well, which you have to do here to shoot a low number.”

Barnes, the 2002 U.S. Amateur champion from Stockton, made three birdies in a row through No. 8 and had his only bogey on No. 16 en route to his 67, while Jacobsen tied for second by carding birdies on four his last six holes while finishing on the front nine.

Patrick Reed, who has won three times on the PGA Tour since last August, shot 68 despite bogeys on the last two holes and was tied for fourth with Erik Compton, who birdied his last four holes, defending champion Bill Haas and Tyrone Van Aswagen of South Africa.