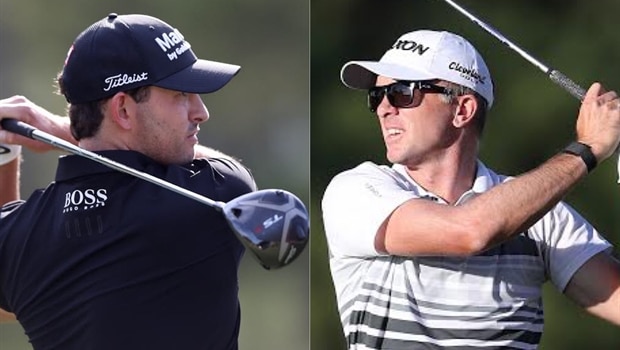 Patrick Cantlay and Martin Laird of Scotland shared the lead in the Shriners Hospitals for Children Open on a day Matthew Wolff stole the show with three eagles in a span of five holes.

Cantlay (pictured, left) and Laird (right), both former Shriners champions playing together in the final twosome, both posted scores of 5-under-par 65 after sharing the lead with three others following two rounds at TPC Summerlin in Las Vegas.

“My strategy out here is to always stay patient, instead of pressing, because there are so many birdie opportunities out there,” said Cantlay, from Los Alamitos and UCLA, who won the 2017 Shriners and has finished second each of the last two years.

“I thought I made birdie putts on the fifth and sixth, but they missed and that happens.

Maybe I’ll make some birdies on the front tomorrow. I realize there are chances out there. I just want to hit good shots and give myself those chances.”

Cantlay, whose only other PGA Tour title came in the 2019 Memorial, collected four birdies on the back nine while recording a 54-hole total of 20-under 193, while Laird a three-time PGA Tour winner including the 2009 Shriners, highlighted his round with a 49-foot eagle putt at No. 9.

“The hole-out on 11, you never expect to hole-out, but when it happens, kind of just puts you in a really good mindset,” said Wolff, who claimed his first PGA Tour victory in the 2019 3M Open. “I was a little frustrated on the front nine. I felt like I hit a lot of good putts and a lot of good shots and shot only 2-under. Especially with how low the scores were, I felt like I was falling back.

“The wedge shot on 10 (to set up a birdie) really was the turning point. That really felt like it was a little different swing, but different in a good way. I flagged it on 10 and then on 11 I holed out. And from then on I felt like I didn’t hit it outside 15 feet pretty much the rest of the way.

Wolff added two birdies and shot 8-under 28 on the back nine.

Defending champion Kevin Na of Diamond Bar, who also won the 2011 Shriners, sank a 10-foot eagle putt on the ninth hole in a bogey-free 64 and is three shots behind in a tie for seventh with rookie Will Zalatoris, who posted a bogey-free 64.

Sixth-ranked Bryson DeChambeau of Clovis, the U.S. Open champion who won the 2018 Shriners and held the first-round lead this time at 62, made two double bogeys on the first six holes, but rallied for a 71 and is in a tie for 31st that includes seventh-ranked Webb Simpson, who totaled 65.