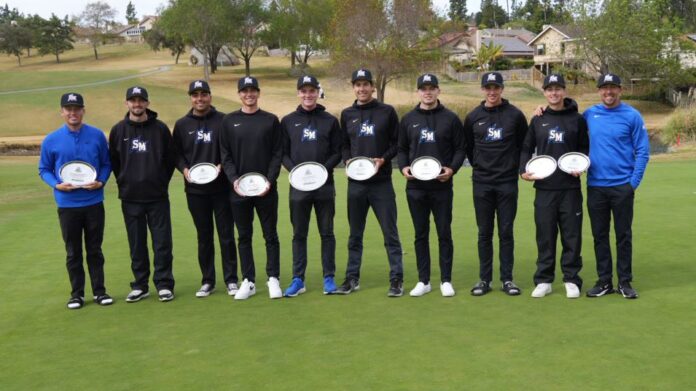 Host Cal State San Marcos led most the way and captured the CSU San Marcus Fujikura Invitational by five strokes over Colorado State-Pueblo in cold, rainy conditions at Shadowridge Golf Club in Vista for its second victory of the season.

The Cougars, who also won the Sonoma State Invitational in September, posted a score of 285-283-296—864, and were victorious in their own tournament for the first time since the inaugural event in 2016.

“I just kept telling myself to remember to have fun,” said Schrodt, whose best previous finish this season was fourth in the St. Martin’s Invitational. “It’s really easy to get caught up in your emotions and lose yourself, so just reminding myself to be present and have fun playing the game was really big for me today.

“It was also fun knowing that I was in contention all day. As an athlete, those are the moments you live for, so knowing that every shot was a test for the work I had already put in was absolutely exhilarating—it kept me locked in.”

Said Dominican Coach Gary Nelson: “He told me going into the last round, ‘Coach, I just want to have fun out there.’ He wasn’t playing the leaderboard, he was playing each shot and trying to have as much fun as he could, he wasn’t checking the leaderboard at all.

“When you are at a golf tournament, you don’t know what can happen, you play the shot at hand and control yourself. He had fun and just played the golf course.”