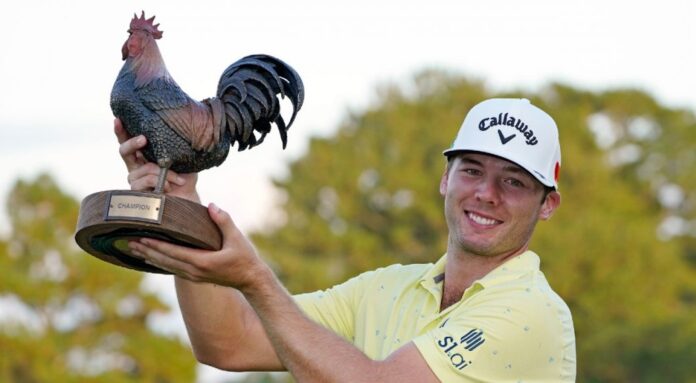 Sam Burns pulled out of a logjam at the top of the leaderboard and claimed his second PGA Tour victory.

The 25-year-old Burns shot 4-under-par 67 to capture the Sanderson Farms Championship by one stroke over Nick Watney of Davis and Fresno State, and Cameron Young at the Country Club of Jackson in Jackson, Miss.

“It’s huge to win my first event of the new season,” said Burns, whose first victory came in the Valspar Championship last May. “I love coming here, I love the course and it’s close to home (Shreveport, La.), so family and friends can watch me play.

“I had a good game plan and just stuck with it on each shot and played with a purpose. I knew if I kept chipping away, it would happen. I got a new Callaway driver a couple of months ago and drove the ball so well this week to set up my second shots.

“I didn’t really see a leaderboard until the 17th green and that’s when it hit me that I was going to win. I knew I could make a 4 or 5 on the last hole and win.”

Burns, whose only other pro victory came in the 2018 Savannah Golf Championship on what is now the Korn Ferry Tour, could even afford to make a bogey on the last hole after taking the lead by making three straight birdies through No. 15 en route to a winning score of 22-under 266.

Watney, who has won five times on the PGA Tour but not since The Barclays in 2012, made four of his seven birdies on the front nine in a bogey-free 65, while Young, who won twice on the 2020 Korn Ferry Tour and was seeking his first title on the PGA Tour, made a lone bogey in his 68.

“The most satisfying part of it is just how I was mentally,” said the 40-year-old Watney, who considered quitting the game in the last year. “I was able to keep it kind of to one shot at a time and not get too wrapped up in where I was or I was this many behind or whatever. That’s probably the most satisfying part because I think the mental unlocks everything else.

“So I’m super excited and I think this proves to myself that what I’m working on is the right things. I’m very, very pleased with my game. … There were definitely some lean times, especially last year, but I’m trying not to think about that anymore, I’m trying to continue to get better and this was a great step this week. Yeah, I’m ready.”

Sahith Theegala of Chino Hills and Pepperdine, who held at least a share of the lead after each of the first three rounds, closed with a 71 and wound up one more down in a tie for eighth with Si Woo Kim of South Korea, who mad a hole in one from 210 yards at No. 7 in his 66, and Seth Reeves, who posted a bogey-free 69.

Cameron Tringale of Mission Viejo, who was only one stroke back in a tie for second after shooting 62 in round three while going for his first PGA Tour victory, could manage only a 71 and slid to a tie for 11th.