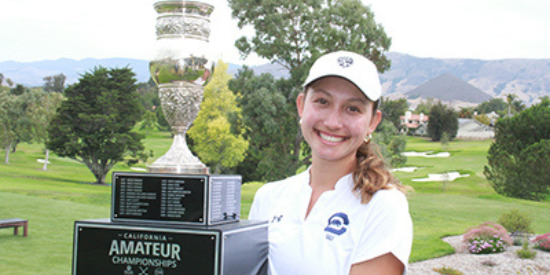 Annika Borrelli of Alamo made a bit of history in the 56th California Women’s Amateur Championship.

The 22-year-old Borrelli, a fifth-year senior at the University of California in Berkeley, defeated Antonia Malate of Seaside, 5 and 4, in the final at San Luis Obispo Country Club and became the seventh player to claim the title in consecutive years.

“I can’t believe it,” said Borrelli, the 2021 Northern California Golf Association Women’s Player of the Year. “I really don’t have any words for it. Being able to defend … it was a lot of pressure. I felt like my dad (her caddie) and I handled it well.

“Going into last year’s final, I was nervous. This year, I was excited. I either had a chance to win the trophy again, or I’d lose to a great friend. One thing I’ve learned with match play is that nothing is ever guaranteed. Even when I was 3-up, I wasn’t comfortable. I knew Antonia was too good.”

Borelli, who also lost in the 2019 Cal Women’s Amateur final to Amari Averi of Riverside and USC, rattled off six birdies over the 14 holes of the final this time to rout her good friend, Malate, who she has known since their days in junior golf.

“Overall, the week was a grind,” said Malate, a fifth-year senior at San Jose State who captured the 2021 Women’s West Coast Amateur and also had her father on the bag. “Annika had a really, really great round. I’m very happy for her.”

Malate, 21, defeated Caroline Canales of Calabasas, 1 up, with a 21-foot birdie putt on the final hole in the semifinals after coming from 3 down through five holes, while Borrelli never trailed while getting past Taylor Riley of San Diego by a score of 3 and 2.