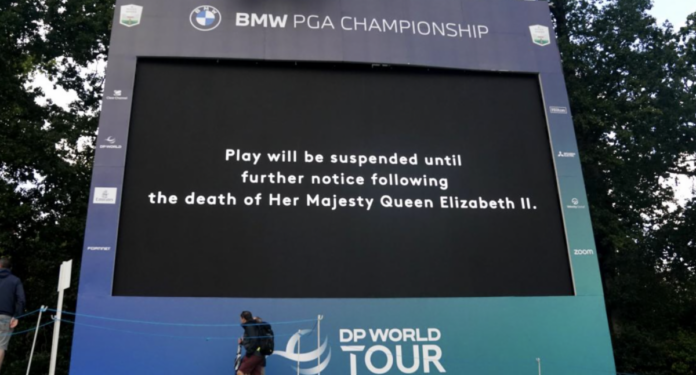 DP World Tour officials, who halted play when news came that Queen Elizabeth II had died during the first round of the BMW PGA Championship at Wentworth Golf Club in Virginia Water, England, on Thursday, said the tournament will continue on Saturday.

In addition, the tournament will be shortened from 72 to 54 holes.

“The Wentworth event will give players, caddies, staff, volunteers and spectators the opportunity to come together across the weekend, not only to express their condolences but also to celebrate the extraordinary life of Her Majesty,” the DP World Tour said in a statement on Friday.

“There is no obligation to cancel or postpone events and sporting fixtures, or close entertainment venues during the National Mourning period. This is at the discretion of individual organizations. As a mark of respect, organizations might wish to consider cancelling or postponing events or closing venues on the day of the State Funeral. They are under no obligation to do so, and this is entirely at the discretion of individual organizations.

“If sporting fixtures or events are planned for the day of the State Funeral, organizations may want to adjust the event timings so they do not clash with the timings of the funeral service and associated processions. As a mark of respect, and in keeping with the tone of National Mourning, organizers may wish to hold a period of silence and/or play the National Anthem at the start of events or fixtures, and players may wish to wear black armbands.”

DP World Tour officials said they were following the protocols of the Official National Mourning Guidance from the British government’s department of Digital Culture, Media and Sport in the wake of the death of Queen Elizabeth II, 96, who reigned for 70 years.

The Tour announced a day earlier that no golf would be played on Friday.

The 30 players who were still on the course when play was called on Thursday will finish their first rounds beginning at 6:40 a.m. local time on Saturday, with the second round to be played when they are finished and the final round scheduled for Sunday.

Tommy Fleetwood of England, Viktor Hovland of Norway and Andy Sullivan of England share the lead after shooting 8-under-par 64s in the first round on Thursday.

There had been some talk that the tournament would be canceled, or at least postponed until a later date.