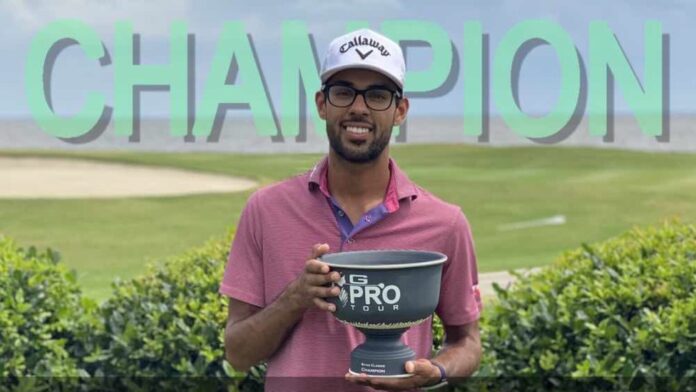 Akshay Bhatia, who was born in Northridge and lived the first nine years of his life in Southern California, seems to be on a fast track to the PGA Tour.

“Just because it hasn’t been done doesn’t mean it’s impossible,” said Bhatia, who passed up college scholarships to turn pro in 2019 and has won four times on lower pro tours after claiming 11 big victories as an amateur. “It took a lot. I had to play well. Everyone was chasing me.

“I just gained a lot of confidence playing mini-tour events. I won my first one and that was a huge steppingstone for me. Then I made my first cut, finished in the top-10, which was great. Just doing that over the course of a year was really big for me, and I just know that I’m progressing every time I’m teeing it up.

Bhatia, who trailed by three strokes entering the final round, nearly holed his third shot for an eagle on the 18th hole before tapping in for a birdie that gave him a winning score of 14-under 274, while Haley finished two back after playing the last three rounds in 67-67-68.

Michael Gellerman eagled the first hole and added seven birdies on the back nine in a 66 and finished four shots back in a tie for third with Carl Yaun of China, who birdied three of the first five holes in a 71, and Corey Shaun of UCLA, who birdied the last hole for a 72.

A.J. Crouch birdied five of the last seven holes for a 65 and was five down in a tie for sixth with Marcelo Rozo of Colombia, who had three birdies on the last five holes for a 70, while Clay Feagler of Newport Beach and Pepperdine fell back with a 73 despite a birdie on the last hole and wound up six strokes behind in a tie for eighth with Ben Griffin, who birdied the last three holes for a 67, and Scott Brown, who birdied three of the first four holes but came in at 71.