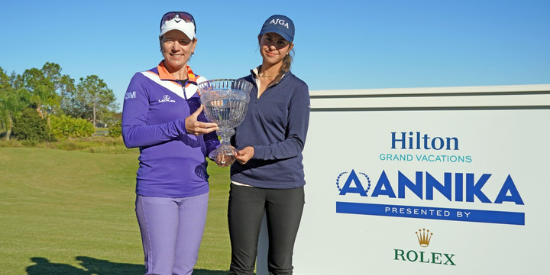 Yana Wilson of Henderson, Nev., used her third eagle of the day to turn back Anna Davis of Spring Valley, Calif., in the 2022 Annika Invitational.

The 15-year-old Wilson, who has won 110 times in her incredible junior tour, holed out from 75 yards on the first playoff hole to capture the tournament title at Eagle Creek Golf Club in Orlando, Fla.

“To win this invitational feels great,” said Wilson, who received the trophy from golf great Annika Sorenstam of Sweden. “I’ve never won an (AJGA) invitational before and since Annika is here, it’s really cool.”

Davis took a three-stroke lead into the final round but made two early bogeys and found herself trailing after Wilson made her eagle at No. 7 with another hole-out from 75 yards.

Then Davis made birdies on the ninth and 11th holes to regain the lead, but Wilson went back in front with another eagle at No. 13. However, Wilson made a bogey at on the 17th hole, and after players birdied the last hole of regulation they went to the playoff.

By winning, Wilson, a two-time national Drive, Chip and Putt champion, qualified for the Hilton Grand Vacations Tournament of Champions this week at Lake Nona Golf & Country Club in Orlando, Fla., where she will compete alongside LPGA players.