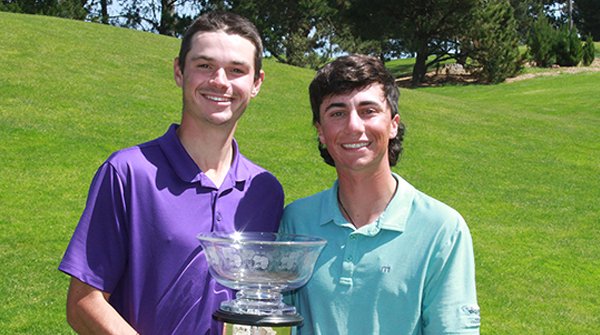 Farnham and Ashbrook couldn’t make a birdie at the beginning, but then collected 10 on the last 13 holes to pull away.

“Our first 10 holes were a nightmare, but then we figured out our strategy,” said Farnham, who barely missed a hole in one on the 12th hole. “It was at that point that we were like, ‘We got this.’ That stretch of closing holes was ridiculous.

“We were really good taking the pressure off of one another. We’re both extremely negative when we do hit bad shots, but we’re both also really good at bouncing back.”
Said Ashbrook: “We just started building on each other’s momentum.”

Ashbrook and Farnham set a tournament record for one round with their 61, and their score of 197 was two off the 54-hole mark set by 2016 winners Bobby Bucey and Brett Viboch.

When he heard about what happened, St. Mary’s Coach Scott Hardy, who was part of the winning team in this event in 2005, sent Farnham and Westbrook a text that read: “Talk about having a great day. Great playing!”