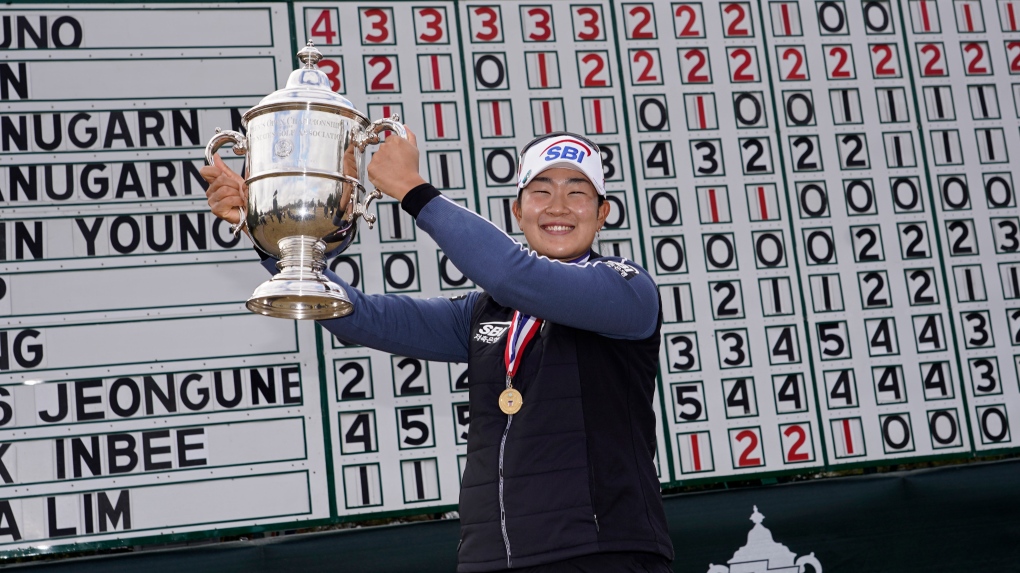 A Lim Kim of South Korea was playing in her first major championship and she walked away with the trophy.

The 25-year-old Kim birdied her last three holes to shoot 4-under-par 67 and win the 75th U.S. Women’s Open by one stroke over Amy Olson and top-ranked Jin Young Ko, also of South Korea, in chilly conditions on the Cypress Creek Course at Champions Golf Club in Houston.

“I’m very honored to win the 75th U.S. Women’s Open,” said Kim, who has won twice on the LPGA of Korea. “Still can’t really soak in that I’m the champion, but it feels different winning the tournament here.

“Back in Korea, the style and the environment is different. But I’m really glad, and through Covid-19 we had a lot of difficulties, but glad we had the U.S. Women’s Open held in Houston. It was a great win.

“I (was) eyeing the leaderboard throughout the round and I knew how many shots I was back. That’s probably the reason why I tried to hit more aggressive, tried to more attack the pins.”

Olson, who held a two-stroke lead at one stage in the final round, made a bogey at No. 16 and finished with a birdie on the last hole to fall short with a 72, while Ko had a single bogey in her 68.

Third-round leader Hinako Shibuno of Japan posted a second straight 74 and was two shots behind in fourth, followed by Meghan Kang, who was two more back in fifth after a 72.

Fifth-ranked Inbee Park of South Korea had three late birdies in a 68 and was five down in a tie for sixth with defending champion Jeongeun Lee, also of South Korea, who totaled 71 thanks to four birdies on the back nine, and Moriya Jutanugarn of Thailand, who made only one birdie in a 73.

Ariya Jutanugarn, the 2018 U.S. Women’s Open champion, finished at 73 and was six strokes behind in a tie for ninth with amateur Kaitlyn Papp, who came in at 74.

Second-ranked Sei Young Kim of South Korea tied for 20th after a 72, while seventh-ranked Nasa Hataoka of Japan shot 72 and wound up in a tie for 23rd that included Cristie Kerr, the 2007 U.S. Women’s Open champion, who struggled to a 77 without a birdie.

Sixth-ranked Brooke Henderson of Canada tied for 44th with a 72, while eighth-ranked Minjee Lee of Australia posted a second straight 74 to tie for 46th, and fourth-ranked Danielle Kang of Westlake Village and Pepperdine tied for 52nd following a 74.

The tournament was forced to a Monday finish after most of the final round was washed out by rain the day before.