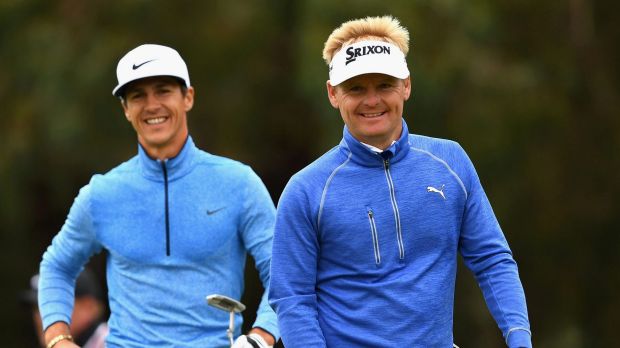 Soren Kjeldsen and Thorbjorn Olesen of Denmark posted a best-ball score of 12-under-par 60 to take a three-stroke lead over Ashun Wu and Li Haotong of China midway through the ISPS Handa World Cup of Golf at Kingston Heath Golf Club in Melbourne, Australia.

Kjeldsen (right in photo) holed out from the third fairway for the first of two eagles and the Danes added seven birdies, including five in a row to start the back nine, en route to a 36-hole total of 12-under 132 after opening with 72 in alternate-shot play.

“Soren got things going by holing that second shot and then I chipped in for eagle (at No. 8),” said Olesen, who has nine pro victories, including four on the European Tour. “To be honest, I was thinking about 59 going to the last few holes, but 60 is a great score. Combined we were very good.”

Added Kjeldsen, who also has four European Tour titles: “I was just trying to play solid. Thorbjørn was playing exceptional so I thought if I get it in play and get it on the green, let him do all the fireworks and it worked pretty well.

“We’re trying to make everybody (in Denmark) proud. It’s just a treat to be here.”

Wu and Li carded a bogey-free 65, while first-round leaders Jon Rahm and Rafa Cabrera Bello of Spain were four shots back in third.

Rickie Fowler and Jimmy Walker of the United States shot 67 and were another stroke behind in a tie for fourth with Victor Dubuisson and Romain Langasque of France, who totaled 67, and Chris Wood and Andy Sullivan of England, and Francesco Molinari and Matteo Manassero, who both came in at 66.

Hideki Matsuyama and Ryo Ishikawa of Japan posted a 65 and were six shots behind in a tie for eighth with Alex Noren and David Lingmerth of Sweden, who shot 66.

Favorites Adam Scott and Marc Leishman of Australia had a 68 and were 10 strokes down in a tie for 18th.