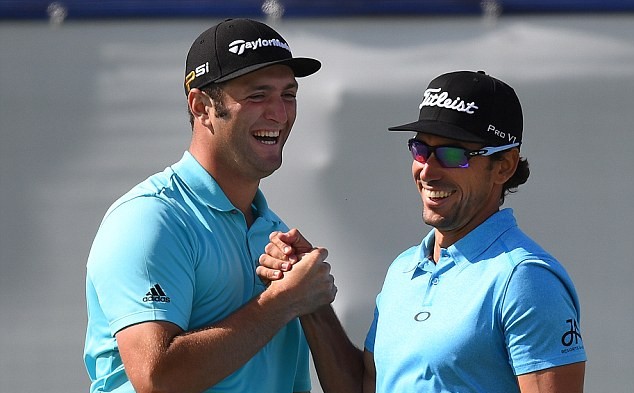 Rafa Carbrera Bello sank a 15-foot birdie putt on the final hole to give Spain a one-stroke lead over the United States, China and France after the first round of the ISPS Handa World Cup of Golf at Kingston Heath Golf Club in Melbourne, Australia.

Cabrera-Bello and Jon Rahm teamed for a score of 3-under-par 69 in the alternate-shot format, carding an eagle, two birdies and one bogey in windy conditions..

“That was a fun putt because when I was seeing it, it looked like I couldn’t miss, and then all of a sudden it could really miss, and I don’t know how it came back,” Cabrera Bello said.

“It’s been a good day. I think we played well. It was obviously tough and tricky with the wind. But Jon played great, I rolled some putts and hit some good shots as well, so I think it was a score we’re proud of but also a score we deserve.”

Rickie Fowler and Jimmy Walker of the U.S. birdied three straight holes through No. 15 en route to a 70, a score matched by Victor Dubuisson and Romain Langasque of France, and Wu Ashun and Li Haotong of China.

“I’m thankful to have a stud partner,” said Walker, the PGA champion. “Rickie putted really well and made some clutch putts beginning of the round. Putting really saved us today.

“I think we got everything out of it I think we could have. Rickie hit it great, hit some good shots. It was an all-around effort.”

Chris Wood and Andy Sullivan of England totaled 71 and were tied for fifth with Francesco Molinari and Matteo Manassero of Italy, while Alex Noren and David Lingmerth of Sweden shot 72 to tie for seventh with Shane Lowry and Graeme McDowell of Ireland, and Soren Kjeldsen and Thorbjorn Olesen of Norway.

Adam Scott and Marc Leishman of favored Australia, the defending champion, struggled to a 74 and were tied for 14th. Scott won the title in 2013 with top-ranked Jason Day, who was forced to withdraw this time because of a back injury.