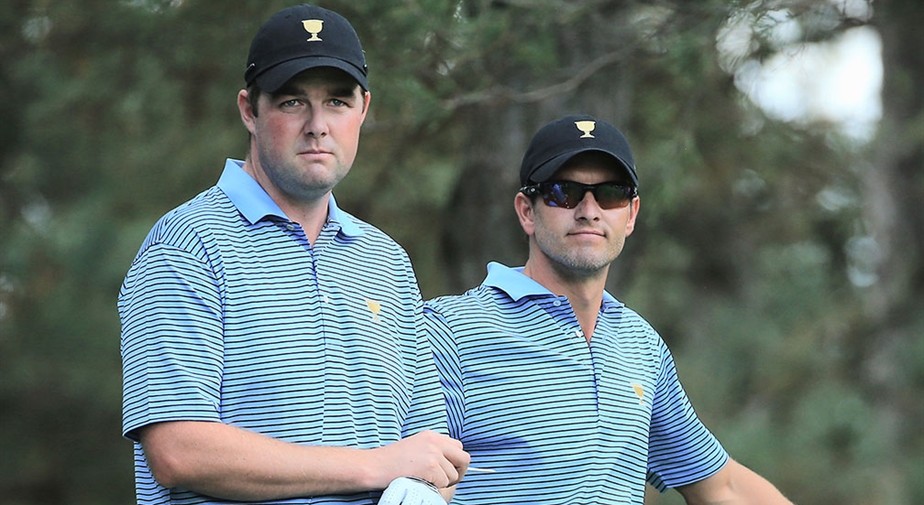 Even though Jason Day can’t play because of a back injury, defending champion Australia is the betting favorite in the ISPS Handa World Cup of Golf this week at Kingston Heath Golf Club in Melbourne, Australia.

Adam Scott, who helped Day win the title the last time the tournament was played in 2013 at Royal Melbourne, chose as a replacement Marc Leishman — the 2009 PGA Tour Rookie of the Year who has won nine times as a pro, including the 2012 Travelers Championship, and has twice played in the Presidents Cup.

Graeme McDowell, who will represent Ireland along with Shane Lowry, agreed that the Aussies are the team to beat but added that the Irish would like to get a piece of the home team.

“I think if we get a chance to play with the Aussie boys, it’ll obviously be great fun, great bit of banter,” said McDowell, the 2010 U.S. Open champion who teamed with Rory McIlroy when Ireland finished second to Italy in the 2009 World Cup. “We’ll probably get a pretty good turnout with the Irish down there, as well.

“I think Shane and I will probably get quite a lot of support, but again, nothing compared to what Scottie and Leishman will get. There is no doubt the home support and the home crowds can obviously give you the energy and buoy you a little bit, but it can also bring the expectation levels, as well.

“Hopefully we can get a chance to play with the boys late on Sunday and have some fun out there with the crowds.”

Rickie Fowler and Jimmy Walker, the PGA champion, will carry the colors for the United States after playing together in the past on Ryder Cup and Presidents Cup teams.

Fowler will represent the U.S. for the third time this year. He finished in a disappointing tie for 37th in the Olympic Games in Rio de Janeiro, then went 2-0-1 in the Ryder Cup at Hazeltine.

“Coming off the amazing experience that I had at the Olympics, it’s great to have the chance to put on the Red, White and Blue again and play for the United States in the World Cup of Golf,” Fowler said.

“Jimmy is not only one of my favorite guys out here on tour, but he is clearly one of the most talented players on our tour as well. I think we’ll make a fantastic team, and our strengths will work well together. I’ve heard great things about Kingston Heath and can’t wait to get to Australia.”

The Americans have won the World Cup, which started out as the Canada Cup in 1953, a record 24 times, with Australia and South Africa in a distant tie for second at five, followed by Spain at four and Canada at three.

The last time the U.S. won was with Matt Kuchar and Gary Woodland in 2011, when the event moved to a biennial event rather than being held every year, and Kuchar finished second with Kevin Streelman behind Day and Scott in 2013.

The three-year gap before this year’s tournament is the longest in the history of the event.

Scott, Bradley Dredge of Wales, who won in 2005 with Stephen Dodd, and Francesco Molinari of Italy, who teamed with his brother Edoardo to win in 2009, are the only players in the field who won the World Cup previously.

“Winning it with Edoardo was amazing,” said Francesco Molinari, who will team with Matteo Manassero this time. “It was a little bit unexpected, but it was a great week.

“It’s a great tournament, as it’s different from most of the events that we play, so you get that little bit of extra fun out of it.”

Other top teams include Hideki Matsuyama and Ryo Ishikawa of Japan, Russell Knox and Duncan Stewart of Scotland, Chris Wood and Andy Sullivan of England, Rafael Cabrera-Bello and Jon Rahm of Spain, Thomas Pieters and Nicolas Colsaerts of Belgium, David Hearn and Adam Hadwin of Canada, Thongchai Jaidee and Kiradech Aphibarnrat of Thailand, Soren Kjeldsen and Thorbjorn Olesen of Denmark, and Alex Noren and David Lingmerth of Sweden.

And they will all be gunning for the Aussies.