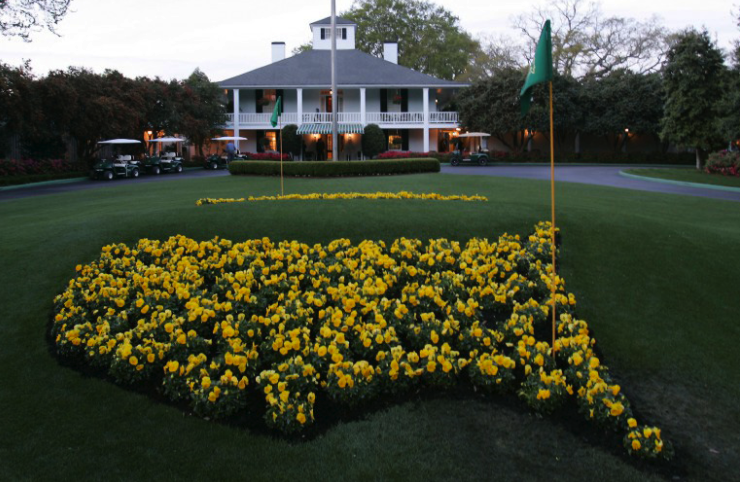 This is a bittersweet week for me as the Masters is by far and away my favorite sporting event of the year, but unfortunately due to other obligations this will be my last Weekly Waggle. I couldn’t think of a better way to end the column than with one final Masters Preview.

Hello friends, and welcome to the greatest week of the calendar year. The azaleas are in full bloom, the pine needles are in place, the magnolias are spectacular and JD is set up in the Hooter’s parking lot on Washington Ave. The only issue this week may be the weather on tap at Augusta National Golf Club. The good news though, as always, with the help of their sponsors, Augusta National and CBS will continue to bring us 56 minutes of every hour of golf coverage.

Hell, even Snoop Dogg is getting in on the action this year hosting a Wednesday night party in Augusta.

As for the guys actually teeing it up this week, the million dollar question is…who wins? Lucky for you I have that covered. As always, the odds below are as of the time this article is posted and most likely will change throughout the week.

Jordan Spieth (7/1) – The guy has played in three Masters and exactly two people have bettered him in the last three years. That’s insane. He lost in 2014 because he wasn’t quite ready for the stage. He won in 2015 in record breaking fashion and failed to repeat last year with his “C” iron-game and one bad hole. This year, he ranks first in GIR, second in SG approach and fifth in proximity to the hole. In other words, he went ahead and fixed the problem that cost him a Green Jacket in 2016. If his iron game is anywhere close to as solid this week as it has been so far in 2017 this might not be a fair fight. No one, and I mean no one, is better at Augusta on or around the greens than Spieth the last three years, or maybe ever. The MC at Shell last week means literally nothing to me other than he got two extra days to prepare for Augusta. Take Spieth Top 10, Top 5 and to win this week; you can thank me later. When it’s all said and done Sunday afternoon, Spieth wins his second green jacket in three years.

Brandt Snedeker (50/1) – For those of you that like to take the guy with big odds, this is your guy. Sneds has been my dark horse at Augusta for the past three years and I’m not giving up on him now. Sneds has eight top 10s in the majors, including three at the Masters (T-10 in 2016) and is arguably one of the best putters on fast greens in the world. He is also playing well in 2017 with a Top 5 at Pebble and Top 10’s at WGC-Mexico and the Farmers. My biggest concern for Sneds remains that he has openly said how much this tournament means to him and I think when he gets into contention at Augusta that works against him. With that said, taking him in a Top 10 bet this week is safe play.

Tyrrell Hatton (100/1) – Who? Most Americans aren’t familiar with Hatton as he has only played four official PGA Tour events so far in 2017, but hasn’t finished worse than 17th in those four events, including Top 5’s at the Honda and Arnold Palmer. This will be his first Masters and he is 100/1 for a reason, but if you only like getting a lot of bang for your buck then Hatton is your guy.

Dustin Johnson (7/1) – The hottest golfer on the planet, the favorite this week and by far and away the most popular pick to win this week. DJ will be right there late on Sunday afternoon, you can all but be assured of that, but win, no. The biggest thing going against DJ is that he has overpowered courses with his power fade and Augusta requires you to hit a draw more time than not off the tee. Jack made it work 40 years ago, but the tee shots aren’t the same as they were back then and as great as DJ is, he’s not Jack Nicklaus.

Rory McIlroy (17/2) – The second most popular pick this week and another guy that will most likely be there on Sunday afternoon. However Rory won’t complete the career grand-slam this week for one very simple reason, he has one 9-hole stretch every year that keeps him from putting on the green jacket. He will put up something in the 38-40 range and it can come on the front nine Thursday, the back nine Sunday or anywhere in-between, but until he can clean that 9-hole stretch up at Augusta he will continue to post Top 10’s at Augusta without closing the deal entirely.

Hideki Matsuyama (20/1) – For months this guy was my pick at Augusta, but he has since come back to Earth and more importantly his putting has come back to Earth. He is one of the best ball-strikers in the world and when his putter gets going he is almost unbeatable, but I don’t see him putting well enough for 72-holes to win this week. He has back-to-back top 10’s at Augusta and I think he will make that three in a row this year, but finishing in the Top 10 and winning are two very different animals.

Justin Rose (30/1) – Rose has never missed the cut at Augusta and has three Top 10’s in his last five starts at the Masters. I think he has another consistent week again this year but simply lacks the ability to get the ball in the hole on those greens as frequently as he needs to in order to win.

Jon Rahm (40/1) – If DJ is the hottest golfer on the planet, Rahm is a very distant second, but second nonetheless. There literally isn’t a weakness in this guy’s game, and by game I mean his ability to play golf in all facets and the fact that he landed a smoking hot girlfriend. Unfortunately he has only played in two majors in his career (one of which was an amateur). Once he gets more experience under his belt he will win a major, probably even several, but not this week. I think he makes a strong showing in his first Masters but the rookie streak lives on another year.

Zach Johnson (70/1) – It pains me to put him in this category, and at 70/1 it might not be a terrible bet…IF, and only IF the weather predicitions for this week hold up. Zach Johnson won the 2007 Masters because it was under water, it’s that simple. Augusta National turned into a plotters golf course for four days in 2007 and there might not be anyone better in the world at that kind of golf than Zach Johnson. They have lengthened it since 2007 and players are even longer now as well, so the advantage he had back then might not be as applicable, but the guy is a mudder. Don’t be shocked to see his name up there if it gets as messy as they are predicting.

Jason Day (15/1) – Yes, Day is a pretender this week. I mean absolutely no disrespect to him or his mom and wish them both the best, but Day has enough issues on his own to prevent him from winning this week without adding the horrible situation his mom is facing on top of it. Day will understandable struggle at Augusta this week.

Justin Thomas (30/1) – Has yet to win a PGA Tournament on the Continental United States, has one Top 20 ever in a major (T-18 in the 2015 PGA) and has plummeted back to Earth since he dominated the Hawaii swing. Hawaii is beautiful…Augusta is beautiful. Hawaii is a VERY long way from Augusta.

Phil Mickelson (30/1) – I went back and forth on which category to put Phil in this week for one simple reason, he will contend at Augusta because he almost always does, but he has zero chance to actually win this week.

Rickie Fowler (30/1) – I like Fowler, I really do, I just don’t trust him to win a major…at all. He clearly has the talent, but when it comes down to it the guy simply can’t get it done when it matters most. He may figure it out before it’s all said and done, but until then, Fowler will continue to be more style over substance. And I’m using the word “style” very, very loosely.

Bubba Watson (40/1) – Guys that have won the Masters more than twice include; Jack, Arnie, Tiger, Demaret, Snead, Player, Faldo and Mickelson. Do you really see Bubba Watson adding his name to that list this year…or ever? Me neither. Bubba went off at 9/1 to win the Masters last year, he is 40/1 only 365 days later. His Titanic like fall in the World Golf Rankings has been a selfish pleasure of mine over the last year or so.

Sergio Garcia (45/1) – Sergio may finally be in a happy place in 2017 but Sergio sealed his fate forever at Augusta in 2009 when he said, “I don’t like it, to tell you the truth. I don’t think it’s fair. It’s too tricky. Even when it’s dry you still get mud balls in the middle of the fairway. It’s too much of a guessing game. They can do whatever they want. It’s not my problem. I just come here and play and then go home.” Yeah, you can’t say that at Augusta and ever expect to win. Golf Gods exist and they have long memories…especially at Augusta.

Louis Oosthuizen (60/1) – A popular pick every year as a dark horse but the fact of the matter remains that the guy lost in a playoff in 2012 to Bubba’s rope hook out of the woods after making a two on #2 on Sunday. In other words, if it didn’t happen then, it’s never going to happen for Louis at Augusta.

Brooks Koepka (75/1) – Brooks is due to break through and win a major, I just think that is coming this summer and not this week.

Smylie Kaufman (150/1) – He’s sponsored by Natty Light, is boys with Spieth and pretty much lives the life you wish you had at age 24. I mean none of that has any relevance whatsoever on him winning this week of course but just think of the party this guy would throw if he actually did win.

Tiger Woods (1 Billion/1) – Even though he had absolutely no chance to win anyway, the major story from this past week was that Tiger will miss his third Masters in last four years. It’s painful for me to see arguably the greatest golfer of all-time go out like this, but like I said in February, the dude is done. Not for the year, forever.

And on that note…

Thanks to everyone who has followed the Weekly Waggle over the last five years or even stopped to read it one or two times. I have loved the feedback, both good and bad, and hope you have enjoyed reading it as much as I have enjoyed writing it.

I also want to thank VegasInsider.com for the opportunity to contribute to their great website over the years and letting me share my crazy thoughts week in and week out. They have graciously offered to leave the window open down the road and I certainly hope to take them up on that if and when the time allows it.

A special thank you to my wife who pretty much hates golf but has read and helped me edit every article I have written for the last five years nonetheless.

Now damn you Jordan Spieth, you better win this week so I can go out a winner. I’m just kidding, there is no pressure there at all…I know he’s going win.

As always, here is the annual “Twas the Night before the Masters” Poem.

Happy Masters Week to Everyone!