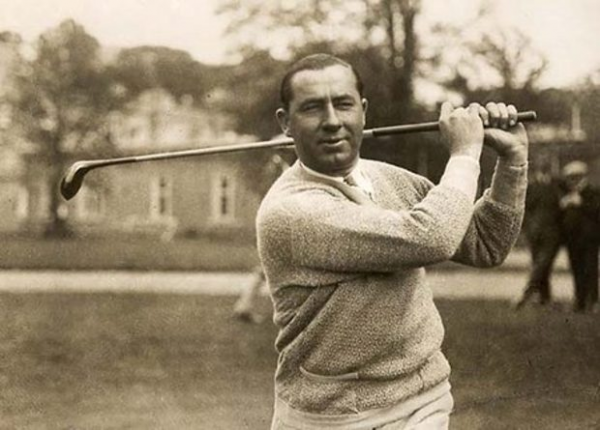 Golf historians know Francis Ouimet put American golf on the front page when he won the 1913 U.S. Open by beating English stars Harry Vardon and Ted Ray in an 18-hole playoff across the street from his house at the Country Club in Brookline, Mass.

However, that was only a prelude to what would happen in the game the following year.

Against the backdrop of World War I breaking out in Europe, three major accomplishments in the game make that a season which stands out.

Ouimet was right in the middle of it again, reversing his loss to Jerome Travers the year before in the quarterfinals of the U.S. Amateur, this time beating two-time defending champion Travers in the final to become the first player to capture the U.S. Open and Amateur.

And Vardon also was a key player, winning the Open Championship at Prestwick Golf Club in Scotland for the sixth and final time, a record that has never been equaled.

However, what happened in the U.S. Open at Midlothian Country Club in Midlothian, Ill., a suburb of Chicago, changed the game in the U.S. and elsewhere for good, and probably led to the formation of the PGA Tour as we know it.

Walter Hagen (pictured), a brash 22-year-old who grew up a few miles from Oak Hill Country Club in Rochester, N.Y., claimed the first of his 11 major championships on his way to refining the definition of the touring pro.

Hagen would go on to win 75 times as a pro, including the 1915 California State Open.

“All the professionals … should say a silent thanks to Walter Hagen each time they stretch a check between their fingers,” the great Gene Sarazen would say years later. “It was Walter who made professional golf what it is.”

It almost didn’t happen, for a couple of reasons.

Hagen also was an outstanding pitcher and shortstop who had a tryout scheduled for early that week with the Philadelphia Phillies, but postponed it to concentrate on the Open. Once he won the title, there was no going back.

And the night before the tournament, “Sir Walter,” as he became known, came down with food poisoning and his participation was in doubt, but he went out the next day and took the lead with a 68, a tournament record at the time.

That might be the genesis of the phrase, “Beware the ailing golfer.”

Hagen led virtually all the way, but had to hold off big-hitting amateur Chick Evans by one stroke at the finish. “The Haig,” another of his nicknames, birdied the 18th hole for the fourth day in a row, but Evans nearly drove the final green, his ball stopping on the fringe.

A huge gallery surrounded the green and watched Evans’ 30-foot putt come up barely short, and Hagen had his first major title.

As a footnote, amateur Jack Neville, who several years later would co-design Pebble Beach Golf Links, was also in the field, finishing 39th in his only U.S. Open appearance.

Ouimet, then 21, opened with a 69 and was in the hunt most of the way before fading with a 78 in the final round to tie for fifth.

However, he had a remarkable season, winning the U.S. Amateur, the French Amateur and the Massachusetts Amateur, in addition to making the trip to England to play in the Open Championship for the first time at Prestwick.

The biggest victory was avenging his loss to Travers, and this time it wasn’t close, as Ouimet prevailed, 6 and 5, at Ekwanok Country Club in Manchester, Vt. Travers, a four-time U.S. Amateur champion, was so stunned by this beating that he didn’t know the match was over.

“I waited for Jerry to do the customary handshaking act, but to my surprise he walked to his caddy, selected a driver and hastened to the next tee,” Ouimet said. “The referee then hustled over to Travers and asked him if he intended to play the bye holes. ‘Why? Is the match over?’

“I was somewhat embarrassed as Jerry apologized for his error and his congratulations were as warm as they could possibly be.”

Ouimet would remain an amateur all his life and claimed a second U.S. Amateur title in 1931 at the age of 38, beating Jack Westland by the same 6-and-5 score 17 years to the day after his victory over Travers.

When Ouimet made his first trip to England, he was entertained throughout by his rivals from the year before, Vardon and Ray, although he never was a factor in his first experience with links golf, finishing in a tie for 56th.

Although Prestwick no longer is in the Open rotation because of its lack of length, it has hosted the oldest championship in the world 24 times, second only to the Old Course St. Andrews, where it has been played 28 times.

Vardon had a special affinity for the Ayshire course, claiming three of his Open titles there, including the last in 1914. A native of the island of Jersey in the English Channel, he was 44 when he claimed his final Open victory in 1914.

After leading much of the way, Vardon entered the final round two strokes behind J.H. Taylor of England, who with Vardon and James Braid, formed what was called “The Great Triumvirate,” as they combined to win 16 of the 21 Open Championships held between 1894 and 1914.

However, Taylor found a bunker and the water on the fourth hole en route to a triple-bogey 7 as Vardon made par before pulling away to win by five strokes. It was the last of his seven major titles, as he also won the 1900 U.S. Open.

Vardon might have won more, but the Open was not played between 1915 and 1919, and by the time it returned in 1920 at Royal Cinque Ports Golf Club in Scotland, he was 50 and past his prime.

Although he led after two rounds, Vardon faded to a tie for 14th, 15 strokes back and never was a factor in the Open Championship again.

However, in that glorious year of 1914, he was still considered the greatest player in the game.