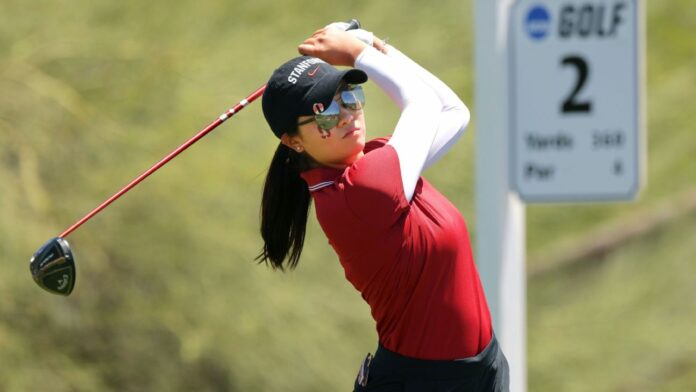 Rose Zhang had yet another big day, and it wasn’t even on the golf course.

Zhang, the 19-year-old sophomore at Stanford from Irvine, was selected winner of the Mark H. McCormack Medal as the No. 1 woman player in the World Amateur Golf Rankings for the third consecutive season, joining Leona Maguire of Ireland and Lydia Ko of New Zealand as the only players to claim the award three times.

On the same day, Zhang was one of three players named to the United States team for the 2022 Women’s World Amateur Team Championship, which will be played Aug. 24-27 at Le Golf National in Paris.

Also on the team are Rachel Heck, a Stanford junior from Memphis, Tenn., and Rachel Kuehn of Asheville, N.C., a senior at Wake Forest.

“My amateur career continues to be incredibly rewarding and humbling,” said Zhang, who recently earned the Smyth Salver Award by finishing in a tie for 30th in the AIG Women’s Open at Muirfield Golf Club in Gullane, Scotland.

“To be named the McCormack Medal recipient for the third time is a testament to the work I’ve put in and the support of those around me. This caps an incredible year and motivates me even further for the season ahead.”

Zhang, who captured the NCAA Women’s Individual Championship and scored the winning point as Stanford took the team title, has been No. 1 in the world for 101 consecutive weeks, behind only Maguire at 135 and Ko at 130.

Kuehn, a two-time WCGA All-American, was selected 2022 Atlantic Coast Conference Player of the Year after leading the Demon Deacons to the ACC title, winning the Northrup Grumman Regional Challenge, the UCF Challenge and the Darius Rucker Intercollegiate.