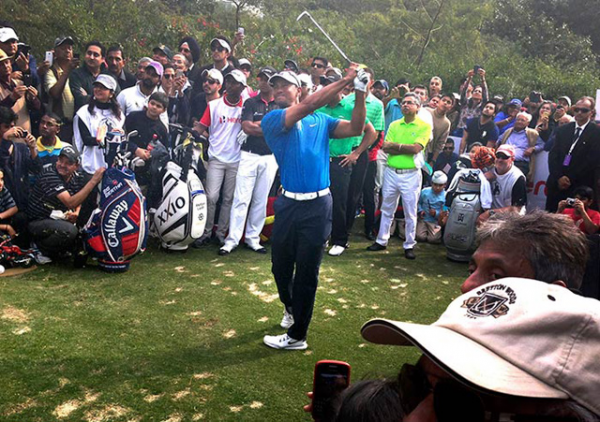 Tiger Woods, off to the worst start of his career, stopped off in India on his way home from the Omega Dubai Desert Classic and shot 9-under-par 63 in an 18-hole exhibition match at Delhi Golf Club, which is known for its tight fairways.

“It’s hard to describe how much fun we had today,” said Woods, who tied for 80th in the Farmers Insurance Open to miss the secondary cut, and tied for 41st in Dubai. “I do have to say, though, this was the narrowest golf course I’ve been to. I’m a pro for a living and I was nervous on those tee shots. I had a great time. I would love to come back.

” … One of my best buddies, Arjun (Atwal, also a pro golfer) back home told me so much about India. He said you need to get (to India). You can have a great time and blast. He was right.”

Munjal played much of the match alongside Woods, Shiv Kapur and Anirban Lahiri, two of India’s better pro golfers.

Sharmila Nicollet, the top woman golfer in India, also played a few holes, as did other dignitaries.

Woods played the front nine in 6-under before carding his only bogey, at No. 11, in front of a crowd estimated variously at between 2,000 and 5,000 people.

Munjhal and Woods teamed against Kapur and Lahiri for a skins game on the last three holes, with the host and the No. 1-ranked golfer in the world winning the final hole when both made birdies, Woods’ being his 10th of the day.

Woods’ play was a continuation of his finish in Dubai, where he birdied the last three holes. He reportedly donated a portion of his fee to Indian charities.